Amazingly, or on second thoughts, maybe not, Humpty Dumpty has turned on his old master, obviously in a shameless effort to brown-nose his new master.

Today HD – that’s Humpty Dumpty - criticised Dr Mahathir in the Tamil daily Makkal Osai for doing buggerall for the Indian Malaysian community under the previous Eighth Malaysia Plan (8MP). He grumbled that the old man gave a thousand promises but in the end it was still eeleh (zilch!)

Here’s the brown paint job - HD said he was confident that PM Abdullah Badawi would keep his word and deliver the promises made to the community under the Ninth Malaysia Plan (9MP).

Remember, HD used to croon praises of Dr Mahathir too? Bet you if Anwar Ibrahim becomes PM tomorrow, he'll be singing his way into the heart of Anwar, and in Hindi instead of Tamil, for Anwar is reputed to love Hindi musical movies.

HD also threatened (who?) that the MIC will make noise and demand for it if the Indian community does not get what has been promised under the 9MP. Well, that’s hardly any comfort to the Indians as the MIC is only good for making noises and fools of themselves.

BTW, what has been promised for the most marginalised community in our society, the poor Indians?

HD claimed he had suggested to the government that a special quarter be set up to monitor what was being received by the community, to which the Prime Minister’s Department had responded by assigning an official to look into the problems faced by the community.

Look into the problems only?

According to HD, Abdullah Badawi has instructed all issues pertaining to the Indian community be discussed with the MIC first. Hahaha!

Here's big-headed Humpty Dumpty all these years as President of the MIC, with the Indian community getting deeper and deeper into the dark depth of destitution, desperation and despair, and he's boasting about the MIC being consulted on issues pertaining to Indians. See my posting The Toddy Syndrome.

A Malaysiakini reader wrote in the Vox Populi column and asked: "The recent demolition of three Hindu temples in the Klang Valley is a good example. Where was the MIC when these dastardly acts were taking place?"

Indeed - where was the Humpty Dumpty and the MIC?

OK, you choose which of following nursery rhymes you prefer: 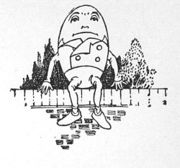 Humpty Dumpty sat on a wall.
Humpty said Mahathir did f**kall.
All Humpty can do as Badawi’s man
Couldn't put the Indians together again.