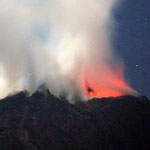 The Indonesian government has upped the alert level for Gunung Merapi to the highest status, signalling that the volcano is about to erupt, though experts still cannot predict when exactly that will occur.

When I was down in Jogjakarta some years ago I saw wisps of smoke rising from the volcano but that was just normal. However, today its danger level is imminently threatening, yet dozens of evacuated Indonesian villagers have attempted to return to their homes on its slopes despite the government warning and evacuation order.

Mind you, other villagers have already fled as lava from Mount Merapi flowed towards their homes.
Elisabeth d'Inandiak, a resident on the slopes of Mount Merapi for the last 15 years said that moving people away from the area will devastate the livelihoods of many. She claimed:

"This is a big problem because they are all farmers and they have to leave their fields and their animals and for them they have no income. One of the main persons who doesn't want to evacuate is the one we call the guardian of the volcano. He's like the captain on the ship you know so if he leaves its like complete defeat."

Well, if we are still on the analogy of a ship, how about children and women leaving first, with the captain of ‘the ship’ last? 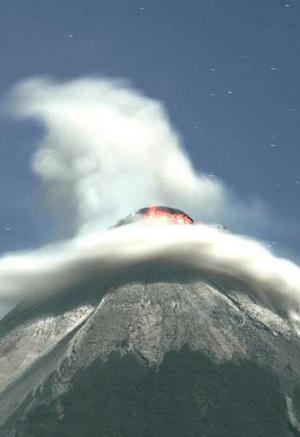 Indonesia's Vice-President, Jusuf Kalla, warned that an eruption this year could be bigger than those in recent times. 66 people killed when Mount Merapi erupted in 1994.

And it's not just people on the ground that would be threatened. KTemoc had read somewhere from old magazines that on 24 June 1982 a BOAC (predecessor to British Airways) Boeing 747 with 240 passengers flying at night over Java lost all 4 engines when it flown into a volcanic ash cloud about 100 miles downwind from Galunggung volcano. From 37,000 feet it lost altitude to 25,000 feet, a frightening heart-stopping 16 minutes before the crew managed to re-start 3 of the engines to make a safe landing at Jakarta.

Then as if no one had learnt anything, a few weeks later, a second Boeing 747 with 230 passengers hit the same type of dirty ash cloud from another eruption of the same volcano. This time the aircraft lost power to 3 engines and descended for nearly 8000 ft before managing to restart one engine. With its two engines it landed safety without any loss of lives.

In both cases, apart from two sets of bloody frightened crew (the passengers were either sleeping or oblivious) the aircraft suffered extensive damage to the engines.

Latest from Sydney Morning Herald at 2:23 pm Malaysian time:
Merapi exploded with clouds of hot gas and ash rain today, sending many villagers scurrying for safety. But ho-hum, not everyone panicked as some diehards (or more likely residents who have nowhere to go or feel they won't be looked after by the authorities) cleaned ashes off their houses while others opened shops, and the ubiquitous commercial mini-buses continued to run.
However as grey ash covered vegetation and rooftops in the area of Ketep, 10km from the base of the mountain, many houses appeared deserted after the wiser residents evacuated. 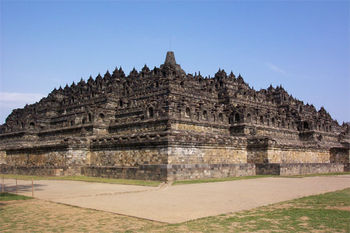 Gunung Merapi had been the culprit that destroyed the Buddhist civilisation of the Javanese Sailendra dynasties, covering up in volcanic ashes one of the world's most incredible monuments, the Buddhist temple of Borobudur.

For centuries, Borobudur laid hidden beneath layers of volcanic ash. Why the kingdom that had built this marvellous wonder deserted the location still remains a mystery. Some scholars believe that famine caused by Merapi's eruption forced the inhabitants to leave the place in search of a new place to live. 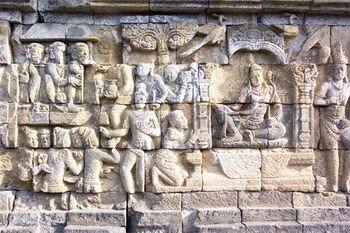 But by the time people once again inhabited this area, the glory of Borobudur had already been buried real deep until its was rediscovered one thousand years later in 1814 by the British administrator Stamford Raffles. 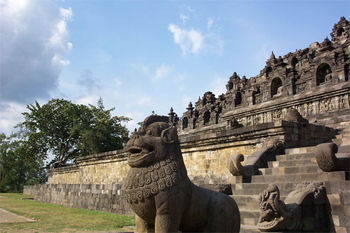 I hope those villages think carefully before they venture back into the danger zones.