The late Johnny Cash sang the Ring of Fire but saudara (brothers & sisters), Indonesia sits on it, namely the Pacific Ring of Fire, where the meeting of continental plates causes high volcanic and seismic activity. Note in the chart below the dotted red ring runs through Sumatera, Java until the nation's eastern islands. 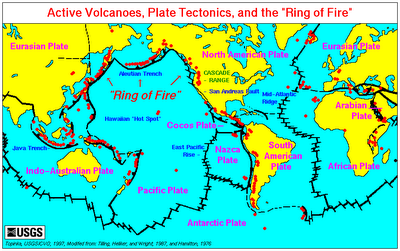 Well, an earthquake just hit the ancient royal capital of Yogyakarta and the surrounding area that has tragically killed 51 people. That’s the figure so far. Hope no Malaysians are there.

The earthquake occurred this morning just before 6:00 am (local time) and had a magnitude of 6.2. Apart from the 51 death toll, it has also injured hundreds. Houses and buildings have collapsed too and the city now suffers electrical cutoff as well. Tremors have been felt in various cities, as well as on the north coast of Java island.

The quake's epicentre was offshore but earthquake centre official Fauzi said that had not caused a tsunami. However he was contradicted by police chief Sampurnojati, who reported on radio that the earthquake was followed by tidal waves.

Whether that was true or not, his statement caused panic in the nation. We all know how Indonesians had been the nation most affected by the the terrible Boxing Day tsunami. So it was hardly surprising that thousands of people have fled coastal areas for higher ground. Why take chances to dilly dally just to confirm the veracity of the police chief’s statement, when ‘higher is safer’?

An official at the meteorological office assured everyone that the quake is not related to the Mount Merapi volcano, which has been rumbling in recent weeks. We also know that the local spiritual Brahmin had appeased Gunung Merapi through his esoteric tantric know-how.

The Plan International aid agency's regional disaster co-ordinator in Java, Brook Wiseman Ross, informed us that according to locals the quake is the biggest they have ever felt. He added:

"I was personally shaken from my bed, furniture was falling, concrete chunks started falling from my hotel room as people were running out in panic in their bedclothes. Clearly many buildings were damaged immediately. I moved on to check on some safety of my staff in other buildings, I could see that the damage was extensive across the city."