At least 66 people perished when Gunung Merapi erupted in 1994, while about 1300 people died in a 1930 eruption. A survivor of the 1994 disaster recalled that the sky went black and a thunder-like roar filled the air, with a couple of explosions. Then the searing hot gas cloud surge from the volcano before it engulfed their village, incinerating 60 people.

Late Monday Merapi volcano finally exploded, spewing gas clouds at temperatures of nearly 900 degrees. These clouds would, as in the 1994 case, kill anyone they envelop. They represent even greater danger than the lava flow. The clouds are endangering nearby villages, demanding a more expeditious full-scale evacuation.

A plume of gas, ash and rock was noted to have travelled about five kilometres down Merapi's western slope yesterday towards the town of Magelang and the Buddhist Borobudur temple. However, according to experts, both sites, or the nearby provincial capital, Jogjakarta are not yet in imminent danger. 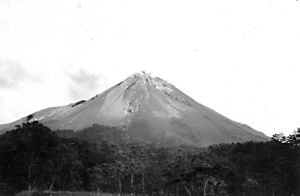 One of the volcano monitors, Sugiono, warned that Merapi's glowing dome of lava was poised to collapse and could send more deadly gas streaming down the mountain at hundreds of kilometres an hour. He warned: "Hot clouds keep appearing all the time. If you get stuck in them, then you have no chance."

But for those residents living on Merapi slopes or nearby villages, Indonesians authorities had to resort in some cases to forceful evacuation because some thousands still remained in the danger zone. Many refused to leave their properties and livestock.

But the most amazing or bizarre reason of all has been the claim of some residents that they enjoyed the powers of ancient rituals which would protect them.

Yes, believe it or not, some villagers continued to hold age-old ceremonies of offering to the spirits. I hope they haven’t thrown any virgins into the volcano, because they (virgins) are a rarity nowadays and ought to be protected as an endangered species ;-)

Malaysian Muslims may not understand this unique Indonesian culture which I had mentioned before. While most Indonesians are Muslim, many of them also follow ancient Hindu rites, animist beliefs and worship ancient spirits. In the case of Merapi worship, when the moon is full, the villages would throw in rice, jewelry and live animals [and hopefully no virgin] into the volcano's crater to appease the volcano's spirits.

Regarding this form of unique Javanese religious practice, it has been rumoured that a former Indonesian President has a family grotto in which he worshipped some ancient (probably Hindu) deity.

An 80-year-old man, Maridjan, appointed by the nearby (Jogjakarta)royal court as Merapi's spiritual guardian, said he would not be leaving even though his house is in the mandatory evacuation zone. Maridjan remains in his village just six kilometres from Merapi's peak, and inspires many adherents of the belief to remain with him.

Officials have urged him to leave, knowing that hundreds would follow his example. But Maridjan dismissed talk of disaster, telling reporters on Sunday the mountain was a blessing and locals should remain and pray. He said that there was no risk.

However, his faith or tantric magic could well be working as reports have since flowed in, suggesting that the volcanic activity has become more calm yesterday. But experts, still cautious, warned that an eruption could still be possible.

The Government official co-ordinating the evacuation, Widi Sutikno, said he had pleaded with those staying behind to "keep looking up at the mountain and have a motorbike ready". 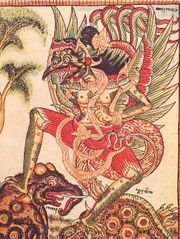 Maybe by then they would need Garuda or Hanuman rather than a bike. But then, mahaguru* Maridjan may just have a few tantric aces up his sleeve.