The situation in Dili, East Timor is worsening since its Prime Minister sacked 595 soldiers over minor grievances. Many blamed him for overreacting and bringing about such a crisis.

Last night in Dili, mobs looted government food warehouses, burnt properties and shot and bashed alleged ethnic enemies. I use the word ‘alleged’ because some experts have said it’snot ethnic violence but mere gangsterism. The official word from the East Timor has been about easterners and westerners bashing it out, but the observers said it’s just raw opportunism for hoodlums to loot and take punitive actions against those they have a grievance with. 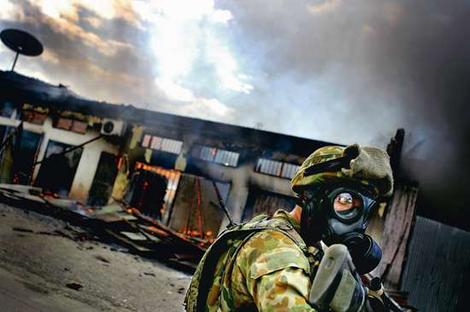 The Dili residents are pissed off with Australian troops because they have expected the soldiers to stop the carnage which has raged unabated. They claimed that the Aussies did nothing. A reporter wrote that about 30 Australian armoured personnel carriers rumbled through the city's streets, but did little to halt the violence or the mass exodus of terrified citizens. Houses and shops were set on fire as ethnic gangs ran amok, while as many as 50,000 people have now been made refugees.

The reality is once the shops have been set ablaze there’s nothing much the troops could do – they are soldiers, not firefighters. On top of that, they have been under instructions not to take sides, nor to mow people down like the Americans do in Iraq. Their sole purpose is to prevent violence using the minimum force, like disarming militias and rescuing trapped residents.

Residents fled to embassies, the airport, religious missions and the compounds of non-government organisations amid rumours that rebel soldiers were preparing to come down from the hills and into the city. Those are the places where Malaysians soldiers have been positioned to guard the buildings.