Ong Ka Ting, president of the MCA informed us he has put his money where his mouth is – namely, in his party’s policy of limiting MCA MPs, ministers and state executive councillors to a max of three terms, he himself will relinquish his post in 2012. He's of course assuming he won't be deposed by an ambitious MCA dark horse, which the MCA historically has plenty of.

His philosophy towards the 3-term max policy is based on a leader being able to implement everything he has planned within that time. He said:

“I will relinquish my post in 2012 even if I enjoy strong support. This is because I believe if one cannot fulfil one’s plans in a limited time one will still not be able to do it even if given him more time.”

“This is why I limited the term of MPs, ministers and state executive councillors from the MCA. I have even limited the president's term, and I myself will be affected.” 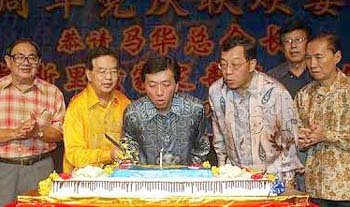 star online photo - can anyone spot a non-Datuk?

He said this would also go towards creating a healthy political environment in the party. What he means in simple layman-speak is to give others an opportunity to go up the party’s ladder and thence to ministerial and state councillors’ appointments. Spread the goodies around, so to speak.

He said this in his speech at the party 57th anniversary dinner organised by Malacca MCA on Sunday.

Much as I hate to admit, being one who hasn’t been favourable to the MCA because I think they are a party of fat cats, I must say that since he became party president, Ong KT hasn’t yet put a major foot wrong. Yes, one could pick points on him but in general he has been very careful to tread carefully to stay fairly non controversial.

When he was selected by Ling to be his successor, notwithstanding party elections and all that, I actually squirmed at this intellectual lightweight, whom I have been led to believe doesn’t even have a good command of Bahasa (Malay language).

* intellectually lacking, with poor command of the Malay language, is mucho problem for a president of the MCA

Having watch him for a while to see whether he would stumble, I have been pleasantly surprised to note he moved or acted with great prudence. And his policies have been fairly good and solid.

One of his plans that I actually like has been his Lifelong Learning Campaign, and with that, revitalising education and Chinese-language education. I support all mother-tongue language programmes just as much as I support the promotion of the Jawi script.

Ong’s other policies are economic competitiveness, development and promotion of culture, new-village development, creating a just and caring society, and creating ‘Rakyat Malaysia’, the last could be a Bangsa Malaysia (Malaysian race) by stealth.

He urged “So let us all work together to take our community and country to greater heights.”

I want to be fair to him and thus am reminded the MCA has been the political party that obtained citizenship for the older generation Chinese, people like my granddad, so in truth the Chinese do owe the MCA something.

But not yet, Mr Ong Ka Ting!

We want to see the MCA diverse itself of the majority of its many Chinese language newspapers your party controls, and the purging of corruption from your party leadership until I won’t consider you MCA blokes as fat cats. So keep working on these.