When I was a wee laddie, my grandfather took me to see an old Chinese movie in our village cinema, where bed bugs lurked among the seats to ambush the sudience's thighs or arms in a jolly vampire feast of sweet blood. But the lure of the celluloid was so great for an ulu [country bumpkin] like me that I braved the itchy bites, scratching my vulnerable spots into bleeding sores.

The torture would then start at home as granddad poured iodine on my wounds. Thankfully for kids, iodine became unpopular for a while because there was a claim it was more harmful than helpful, but god save us now as it has made a dramatic comeback. 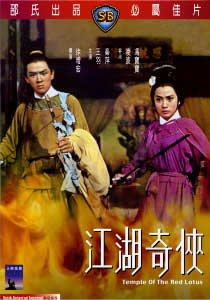 That film must have been shown more than a zillion times throughout the villages of Malaysia because we kept getting those annoying white intermitten flashes with black scars, stars of david, unround rings and numerals which counted backwards to zero as if we were at Cape Kennedy, until even the poor old brave film eventually burnt out, right near the finale of our movie session.

Even as a little kid, I joined in the booing when the lights came on and, because the projector window was so big, we could see the projector operator calmly using probably his spit and whatnot to rejoin the film. There he was in his Ah Peh [daggy] singlet working away with both hands, even as he puffed away at his smelly cigar. My jeering at that show was what probably set me off on my course of adult leftwing proclivity.

Anyway, the film was titled Hui Sioe Ang Lian See, and that's in Penang Hokkien. In Mandarin it would be a more snotty Huo shao hong lian si meaning The Burning of the Red Lotus Temple. The word 'lotus' is generally a symbol of, and thus refers to Buddhism, which made the temple a Buddhist one.

the nasties masquerading as monks

The story has been a (older) very popular Chinese novel, perhaps even a classic, but I don’t believe the film I saw was the original 1928 classic silent movie, which apparently ran for 27 hours over 18 episodes.

The one granddad took me to was hardly silent as it had all sorts of swearing and curses, where lecherous Buddhist monks (to be fair to our Buddhist readers, they were villainous masqueraders) leered at half naked women who all had immaculate hairdo despite being ravished, grabbed at, assaulted and thrown around during the wushu fighting.

heroic couple - should be me comforting the sweet babe

Since that day I entertained suspicious nasty impression of Chinese Buddhist monks, and imagined temples having secret trapdoors and chambers, where within Salome, she of the 7 veils, was undoubtedly belly-dancing away for the gratification of unshaven ogling clerics who guzzled rough wine in copious quantities and ripped away at greasy chicken thighs, while simultaneously fondling unfortunate village maidens.

she's pissed and looked like my Ex (when pissed)

The chief monk of a temple in the Kinta Valley was found with a naked woman in his private chambers by a police team investigating allegations of criminal intimidation last Tuesday. That (the naked woman) was just the unexpected bonus for the cops as the 40-year old chief monk was taken away by the authorities for a different matter, criminal intimidation of members of the temple committee, but His Sleaziness is now out on bail.

The monk was embroiled in a dispute with the temple committee over the alleged non-submission of financial accounts and his close association with the 30-year old woman, whom he claimed to be his god-daughter. Yeah, I bet!

A bit of Shaolin then occurred when the monk was alleged to have threatened to kill the temple committee chairman for interfering in the temple’s financial matters. Hellooooo there, Buddhist clerics aren’t supposed to kill or be involved in earthly mundane matters so why was the chief monk taking on the role of temple accountant? Just a mere rhetorical question because I am sure we all know the answer.

Police also recovered pornographic materials, weapons and liquor from the monk’s chambers, probably training aids that he must have used to demonstrate what were sinful, but where were the greasy chicken thighs?

Following the discovery, the temple committee wanted to disrobe the chief monk, but before they could do that, the chief monk beat them to that act by having already disrobed his god-daughter.

I wish my dear granddad was still alive today because I would have loved to share this one with him, a Red Lotus Temple in our own backyard. I bet the chief monk was unshaven too ;-)