On the 5th day of the Chinese 5th lunar month (the ‘double 5th’), Chinese in Malaysia would celebrate the chang festival. The chang is made up of glutinous rice, shaped like a mini-pyramid and filled with salted egg, beans, chestnut, mushroom, meat, and wrapped in bamboo leaves, and then steamed. There is another version without any fillings where the chang is taken as a dessert, to be dipped in gula melaka (palm sugar). The latter is a creation of the nyonya (Chinese Malaysian born in Penang & Malacca), and naturally popular in both Penang and Malacca.

Many may not be aware that the chang is actually associated with the Dragon Boat Festival. It is a festival reflective of the Chinese people’s love for Qu Yuan, a patriot during the Zhou dynasty. He was a minister during the Warring States Period (475 - 221 BC).

To cut to the chase, Qu Yuan served as minister to the Zhou Emperor. He was loved by the common people because of his incorruptibility. He fought against the rampant corruption that plagued the court. When the emperor, instigated by others envious of Qu Yuan, had him removed from his position, he left the court.

Because his advice was not heeded, the Zhou kingdom was defeated by the Qin. Qu Yuan, as a patriot, couldn't stand the very thought of his people being subjugated by another kingdom. Falling into deep despair he threw himself into the Milou River.

As he was so loved by the people, fishermen rushed out in long boats, beating drums to scare the fish away, as well as throwing chang into the water to distract the fish from his body.

Thus was born the Dragon Boat festival, commemorated with dragon boat races and chang on the ‘double 5th’ of the Chinese lunar calendar. 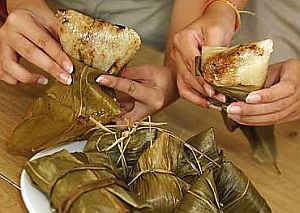 This year because of the pork sellers’ boycott of the pig breeders due to price disputes, Chinese Malaysian would have to do without pork as part of the ingredients.

The Star Online reported that more than 3000 pork sellers nationwide will not be opening shop for four days prior to the May 31 festival to protest against the continuous increase in ex-farm prices. The pork sellers are caught between the pig breeders and the customers who complained about rising pork prices. They claimed they have been bearing the adverse effect of a diminishing profit margin.

Maybe it’s appropriate that this year Chinese Malaysians should celebrate the festival of a patriot with halal (kosher) chang, to symbolically throw the chang into the Malaysian (not Milou) river, so as to scare the sharks away from a brave man who resigned from a corrupt court on a principle, and who has been politically drowned for his belief and patriotism.

Roll out the dragon boats and beat the drums to search for Shahrir Samad.