The bloke who accompanied Matthias Chang in the latter’s nuclear strik … eh … I mean ... press conference was former Bar president Zainur Zakaria. After Chang had flung his nuke devices around, Zainur said some interesting stuff.

He declared that Malaysians have an intrinsic right to know the facts behind the government’s decision to scrap the bridge project. The government owes the people an explanation on why it has abandoned the construction. 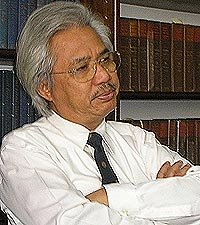 I agree. Whether the bridge was a bad idea or otherwise, and let’s put our dislike of Mahathir aside for a moment and ask, what the hell has been going on? As I have blogged from the very start, the 'sand and airspace' reasons, though emotional to many Malaysians dreading an intrusive Sinagpore into our domain, are just not plausible.

We also shouldn't be like automated robots and declare that just because the PM abandoned Mahathir’ project that decision must be good. It insults our intelligence to resort to a simplistic argument that because Mahathir = bad, therefore anti-Mahathir = good!

Zainur said: “We want to know the truth. We want to know the facts. If the government claims that it was done in the interest of the people, then the people have the right to be given the correct information. Otherwise, don’t claim it is the people’s decision [sand and airspace issues as claimed by PM AAB] because we can’t make decision in ignorance.”

“They [government] are not even prepared to expose the true facts. You cannot claim that it is the decision of the people when we don’t even know what the facts are. How can you say the people have decided? When did they ask the people to decide? When were the facts put before the people? How can we ever give a consensus when we don’t know the facts?”

“The fact remains that the people have a right to know the true reasons why the bridge is not going to be built.”

Indeed, and he asked pointedly where were the government’s claims of transparency? He cried shame on the mainstream media for not questioning that abrupt turnabout decision but instead obsequiously supported whatever the government did. He also complained he wrote a letter to the newspapers which wasn’t published. He asked why the newspapers didn’t see it fit to publish “a simple letter asking for the true facts behind the reason why the bridge project will not proceed”.

Maybe facts could be embarrassing and not meant for plebeians like us.

KTemoc reckons part of the problem, which the PM cashed in on, has been the Mahathir factor. Some years ago, in the same manner that Mahathir was so disliked, the majority of Malaysian public blindly supported Anwar Ibrahim and his call for a reformation movement, despite the very fact that Anwar had been the deputy president of UMNO and deputy PM for years, right up there at the very top beside Dr Mahathir. Again the unfortunate formula was the emotionally-blind argument of Mahathir = bad, therefore anti-Mahathir = good!

Indeed Zainur asked everyone, especially the press: “If you complain about the past leadership, then what’s the difference with the new one? It’s only a different set of people taking over the media now. They are there to cater for the interests of certain people now in power. And we, the people, have been waiting a long time to see some improvements. But it’s not happening, we don’t see anything yet.”

And he even has something for wannabe 'elder statesman' Anwar Ibrahim. He said the ex-deputy premier had also claimed to have been helpless to make changes while in government.

Addressing Anwar he asked: “But look, you were there (in government) for 16 years. Then, what were you doing all those years? What did you actually do when you claimed you couldn’t do anything?”

He stated that the option to quit the cabinet could be taken by any member of the cabinet if they disagree with a decision. Therefore Anwar Ibrahim cannot simply shrug off his participation and responsibility in the old Mahathir cabinet. In fact, I would say that every time Anwar condemns Mahathir, he cuts off a slice of his own nose.

He concluded: “Pak Lah cannot now turn around to say that the decision to build the bridge was a cabinet decision. You were part of that cabinet, so it was your decision too.”