After vaporising Syed Hamid into radioactive waste, Matthias Chang turned his wrath on the Singaporeans.

Chang cited a letter on former Senior Minister (and current Minister Mentor) Lee Kuan Yew’s recollection of eight ‘agreed items’ with Mahathir in August 2000 at Putrajaya. Chang, or rather the news item didn't exactly specify what those 8 items were, but I suspect they could well be bridge, water, sand, airspace, Malaysian government's land in Singapore, CPF, etc. Chang claimed Singapore had used these to push for a binding agreement on water. 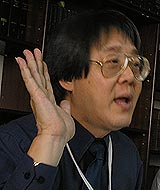 Chang demanded that Lee, former Singapore premier Goh Chok Tong and both foreign ministers explain the document. He said: “I’ll show to you the craftiness and the insidious method of presenting evidence by Lee and the Singapore government. (But) we will take the bull by its horns. We will use their same document to expose their lies to show their selectiveness in what to agree and what not to.”

Yes, we all know Singapore has always been arrogant towards relatively slower Malaysia - that's in the nature of the beast. But perhaps there were more to it than just plain incompetence on our part. Maybe we were willing captives or willing partners or even willing initiators [of the 'desired' fiasco]?

Chang then brought out the sneakiness of Singapore in outfoxing Malaysia by quietly slipping in a “package” approach when both had earlier agreed on discussing water, airspace, CPF, bridge and KTM [Malayan Rails] land separately.

He accused Singapore of taking advantage (of a dozy Malaysian government) and said: “The bridge was never an issue. Singapore’s flip-flop over the bilateral agreement is merely to drag the other outstanding issues into the negotiation. I want to know why the [Malaysian] government had agreed to incorporate airspace and sand into the negotiation and thus get entrapped in a limited package approach?”

As I have said before, KTemoc suspects that someone [not Najib] on the Malaysian side whispered to the Singaporeans to raise the “package” approach, involving sand and airspace, to stir Malaysian emotions about a kiasu grabbing grubby greedy Singapore.

Just like the Arabs were led by their nose into the caricature bait, resulting in the desired antagonism of the Europeans to the financial disadvantage of the Palestinians, we were led by our nose into a provocative deadlock, providing the excuse for the Malaysian government (or at least an interested faction of it) to call off the bridge construction. The excuse used of course was the emotional ‘sand and airspace’ issues which, as agreed by two successive Singapore PMs, were never to be a “package” solution together with the bridge.

Could we just put aside our personal dislike for Dr Mahathir, not let it cloud our logical thinking, and ask whether such a possibility would be plausible?

Chang said that when Singapore commenced the negotiation on its usual song-and-dance routine, why did Syed Hamid bother to drag on with the negotiations – even more puzzling when one cosiders that Goh Chok Tong’s letters, agreeing to Malaysia building the bridge, were all along available in Malaysian hands.

Chang again accused Singapore: “It’s purpose was to scuttle all prior agreements and understanding, throw the spanner in the works and then make outlandish demands to try by the backdoor to introduce extraneous factors to link the bridge issue with intractable issues like airspace. Sand was a totally new issue.”

Chang took us back to 2001 when he noted that Singapore had not raised the possibility of disconnecting the water supply to divert the pipes for the bridge as a security issue. So why was there talk of water as a Singaporean casus belli (reason for war)?

He asked “How come out of the blue, all these problems are coming out now? This, they have failed to explain.”

“They can unilaterally hantam (whack) us and revoke a prior agreement but we can’t. Singapore has the freedom and legitimacy to run circles around Malaysia and make fools out of us.”

KTemoc again offers his theory, that the Singaporeans were possibly advised or more likely, requested by someone, whom the Singaporeans saw as a strategic partner to their advantage. So, could it be that the Singaporeans only played ball with a eye into the future where they see they could subsequently cash in on someone’s gratitude? Maybe I better write the sequel to the Da Vinci code – you know which one!

Then he put the extra megaton kick in his ballistic missile by stating sarcastically: “What is worse, our negotiating team is at pains to justify Singapore’s position and appeal to us, the citizens to appreciate the sensitivities involved. We must keep on giving while Singapore is at liberty to keep on asking.”