Last year on or just before Good Friday-Easter I posted Judas Iscariot - Betrayer or Scapegoat?

Like many others I have been intrigued by the Christian world’s most famous betrayer. The English lexicon has been enriched by the biblical episode of the betrayal of Jesus.

The word ‘Judas’ came not only to be associated with, but actually mean ‘traitor’, along the same lines as the less known ‘Et tu Brutus’ meaning 'Even you, Brutus'*, the dying exclamation of Julius Caesar in realising the betrayal by his beloved friend Brutus

* (he was reputed to have said, "Even you, my son" suggesting that Brutus was more than a close friend, but William Shakespeare changed it to 'Et Tu Brutus').

The 30 pieces of silver given to Judas Iscariot for his betrayal of his teacher is used frequently today to signify ‘treacherous sell-out’ or ‘betrayal’ for money.

In my posting I, like many others, asked of the Christian contradictions against Judas Iscariot, as follows:

(1) If Jesus foresees Judas' betrayal then Judas has no free will, and cannot avoid betraying Jesus;

(2) If Judas cannot control his betrayal of Jesus, then his punishment and portrayal as a traitor in western culture is undeserved;

(3) If Judas is sent to Hell for his betrayal, and his betrayal was a necessary step in the humanity-saving death of Jesus Christ, then Judas is being punished for saving humanity;

(4) If Jesus only suffered while dying on the cross, and then ascended into Heaven, while Judas must suffer for eternity in Hell, then Judas has suffered much more for the sins of humanity than Jesus, and his role in the Atonement is that much more significant.

Many also asked if the Bible states that on the cross Christ forgave those who had contributed to his death, saying that they 'know not what they do', why then was Judas Iscariot the only one not included in this pardon?

In that posting I referred to Hyam Maccoby, author of Judas Iscariot and the Myth of Jewish Evil, who suggested that the medieval Church deliberately stressed on Judas as the ultimate betrayer. The Church wanted to make him the ‘fall-guy’ or scapegoat, because this role, played at an individual level by Judas, would then be played also by the Jews as a whole.

Making Judas guilty allowed the medieval Church to pretend neither Jesus nor the other apostles were Jewish. With this contrived Jew-bashing – their role in western eyes as Christ killer - the medieval Church wanted to 're-invent' Jesus Christ as a non-Jew.

James A Nollet, a book reviewer of Maccoby's book, attracted our attention to a peculiarity about Judas name that I found interesting.

Nollet asked of us: “Now consider who Judas really is. He's the only disciple with a surname."

Strange, isn't that so?

Nollet then said that the surname is not a Jewish surname. He went on to translate ‘Iscariot’ (in a fairly detailed process) as ‘daggers’. In other words, Judas Iscariot had then meant Judas the Daggerman, or Judas, Man of Daggers.

Nollet averred that this name is significant because the noted Jewish historian Josephus recorded that during the time of the Roman occupation of Judea, there was a group of assassins within the Zealots who frequently picked off stray Romans by stabbing them to death with the sicarii! [a root word leading to the compound ‘Iscariot’].

According to Nollet, those Jewish Zealot assassins were called Sicarii. That would mean Judas was in this class of Jewish Zealots, a patriot.

Recently, a hitherto unrecognised 5th Gospel, deliberately marginalised by the Church as blasphemous, has emerged for evaluation by modern Christian/biblical scholars’.

The 5th Gospel was discovered in 1945 as part of the famous Nag Hammadi Library, which scrolls led to a re-evaluation of early Christian thinking. Read this for the full story of its discovery. 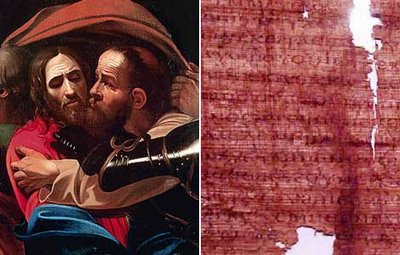 The 1700-year-old papyrus manuscript reveals what we have been inquiring all along of the unusual demonisation of Judas Iscariot by the Church. Judas was in fact under orders from Jesus when he ‘betrayed’ Jesus.

It was none other than the National Geographic Society who released key passages from the 3rd/4th Century Coptic manuscript that Judas ‘sold’ Jesus out as an act of obedience and not treachery, thereby fulfilling his theological destiny.

The Church has been in an uproar, ranging from cool dismissal to outraged repudiation of the 5th Gospel. This was what the revealed Gospel, now tentatively named as the Gospel of Judas, has to show of some interaction between Jesus and Judas:

In the first scene Jesus laughs at his disciples for praying to ‘your God’, referring to the gnostic notion of a lesser Old Testament God who created the world.

The disciples turn away when Jesus challenges them to look at him and understand him.

Judas is singled out several times for special status: "Step away from the others and I shall tell you the mysteries of the kingdom. It is possible for you to reach it, but you will grieve a great deal."

In the key passage, Jesus tells Judas: "You will exceed all of them. For you will sacrifice the man that clothes me."

Jesus tells Judas: "You will be cursed by the other generations - and you will come to rule over them."

Thus Judas Iscariot has been designated by Jesus Christ as the primus inter pares of all his disciples.

Judas Iscariot had been the Chosen One. But will the Church rehabilitate the name and loyalty of Judas Iscariot, and in the same process undermine one of its pillars of belief?