Was Udayappan Beheaded After His Death?

According to the New Straits Times (NST), the Coroners Court has not only ruled that the body found in Sungai Klang was Francis Udayappan but there was no foul play, as alleged by his mum. Sarah Lily, the mother of the deceased has claimed that Police had been responsible for her son’s death while the man was under police custody.

Coroner Nazran Mohd Sham said there was no foul play after returning an open verdict into Udayappan’s death, He said the court could not be involved in a guessing game as to the cause of death by basing its finding on assumptions.

What confuses me as a layperson has been a seeming contradiction in the coroner’s pronouncements. On one hand he has returned an open verdict declaring that he won’t indulge in guessing or speculating on Udayappan’s death – so far so good. Then he seemed to contradict himself by declaring in the same breath that there’s no foul play!

As a layperson I wonder whether that bit about ‘no foul play’ has been a speculation in itself?

What is an open verdict then?

I googled around and found this in a BBC news article: “An open verdict means insufficient evidence was found to record a verdict such as misadventure or accident, but does not rule out future police investigations or court hearings.”

In other words, while the coroner couldn’t record ‘foul play’, neither could he rule it out completely as future investigations or court rulings may confirm that.

Indeed, even the NST advised its readers that “an open verdict means the court could not determine if the death was a result of natural causes, an act of God or an accident.”

So, if the coroner couldn’t determine the death "was a result of natural causes, an act of God or an accident", how could the coroner say there’s no foul play? Why not leave it as an open verdict, without speculating that there was no foul play?

Francis Udayappan was detained by police in 2004 for questioning. When he disappeared police claimed he escaped and jumped into the river. When a decomposing body was recovered from the river Sarah Lily insisted the corpse was Francis and that the police had something to do with his death. Police denied the body was Udayappan. 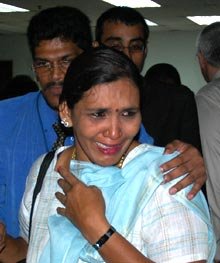 It was a Royal Commission on the Police Force that subsequently ordered the inquest. OK, the identity has now been settled. The coroner went on to say there was nothing to contradict police evidence of Udayappan’s escape.

He said: "The fact is that the deceased found a way through the fence to escape and jumped into the river behind the station."

Fact? I have to admit again as a layperson I am thoroughly confused by the coroner's statement. Can someone who knows legal-speak please help clarify the strange confusing terms to enlighten poor me?

For example, how did the coroner know that "there was nothing to contradict police evidence of the late Upayappan's escape", ending in his jump into the river? Did he rely solely on the police report? If so, could that report from an 'interested party' in an allegation of police abuse be claimed as a 'fact'? Should he have relied solely on a report by an ‘interested party’, considering the inquest had been for the specific purpose of verifying an allegation associated with a death of a police detainee?

These were what the coroner Nazran Mohd Sham based his assessment stating that there had been "no foul play or any criminal element leading to Francis Udayappan’s death":

(1) A doctor, Dr Kasinathan, confirmed that there were no external injuries or visible bruises on the deceased;
(2) The deceased did not die of poison as toxicology tests did not indicate such.

I wonder whether the coroner had taken into account Sarah Lily’s utter shock and observation that his son’s corpse had been mutilated since she first saw it. Udayappan's head was missing.

Udayappan’s family averred that the corpse had a full head 2 years ago when it was retrieved from the river. All that was left was a clean mandible bone with some teeth sticking out of a part of the skull that was left. In other words, other than the lower jaw, the head had disappeared. Therefore it wasn’t surprising that the family alleged the body had been tampered with.

Had the missing head been around, could a pathologist then ascertain whether it had any injuries? Who knows, since it’s no longer around. Alas, what a shame. Hmmm, I wonder whether a human skull can decay or deteriorate until it disappears after 2 years.

Sara Lily said the frustrating but sensible thing – she would not lodge a police report on the matter of the decapitation, because she didn’t see any point in lodging a report as the very same police would be investigating their own selves. And that’s why we need the IPCMC.

Oh, BTW, PKR members were at the funeral in large numbers.