The Betty Mahmoody of Malaysia!

I love happy endings – in fact I am a sucker for such, sometimes sneaking a few teardrops without anyone noticing wannabe-macho KTemoc ;-)

One of the happiest ending must be for Australian Jacqueline Pascarl. If you want to know how things for her and her married life marched up to today, the New Straits Times has a fairly accurate version here.

The Australian end of the story tends to 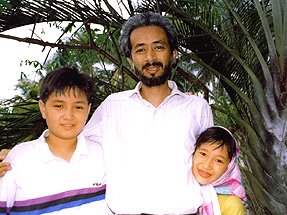 evolve over time – eg. Jacqueline Pascarl was a (teenage) ticketing agent in a MAS office in Melbourne when she met and married Raja Bahrin, her Malaysian husband more than 20 years ago, but now she’s mentioned as a ballet dancer - and also/naturally favours the Australian side.

After their dramatic spiriting away by their father, the 2 children grew up in Malaysia. 14 years later, at 21 years old, Jacqueline's daughter Shahirah has flown down to Melbourne to be reunited with her to everyone’s delight. The reunion eventuated after 3 years of covert e-mailing.

Jacqueline Pascarl said the things most mother torn apart from their children would say, the principal one being her terrified concerns that she might not live up to Shahirah’s expectations when they met, but they got along just great. She is now bracing herself for the next encounter with her 23 year old son who will see her one day soon. I wish them well.

Shahirah’s father, Raja Bahrin is of course wanted in Australia for kidnapping. Many Australians think of him as a criminal. While it’s very sad for families to be broken up in the way as Raja Bahrin and Jacqueline Pascarl and their 2 children had experienced, and I believe both parents have been and are equally loving to the kids, I am fairly sympathetic with Raja Bahrin’s side of the story.

I am of course not condoning the rather dramatic kidnapping conducted by Raja Bahrin, but unfortunately in Australia, fathers have generally been the losers in divorce cases especially with custody of children. Raja Bahrin was deeply concerned that his 2 kids were not brought up as Muslims in accordance with the settlement 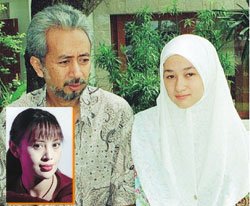 agreement. He retrieved them by stealth to ensure they were raised as Muslims.

Discussing this case, revived after it happened years ago, with Aussie friends who wanted to mangle Raja Bahrin for his criminal kidnapping, I stumped them easily when I likened Raja Baharin to Betty Mahmoody. Without fail, my Aussie friends would suddenly see the other side of the story. I am not sure whether Raja Bahrin would be pleased for me to call him the Betty Mahmoody of Malaysia but certainly he now appears in more favourable light in the eyes of a few Australians.

Betty Mahmoody’s story, which many film and book critics advised us to take with a hugh grain of salt because it’s written by a woman who hated her Iranian husband and at the same time wanted to dramatise her book for sales, and therefore for us to keep a finger on the ‘Maybe’ button, relates her side of a broken marriage and the fight for custody of her daughter across international boundaries.

It tells Americans and the western world of how she courageously spirited her daughter out of terrible Iran back to the good ole democratic USA, and away from her nasty abusive Iranian husband. If that didn't win Americans over, I don't what would. Her book ‘Not Without My Daughter’ was made into a film, where award winning Sally Field played heroic her.

Of course Americans and the West loved her story, despite it being one sided. She was honoured as Outstanding Woman of the Year by Oakland University and as the Most Courageous Woman of the Year and Woman of the Year in Germany. She also received an honorary degree from her Michigan alma mater, Alma College.

But the other side of the coin had her telling flagrant lies to dramatise and popularise her story. And I can bet there would be very few Americans, especially today, who would express their sympathies for a lonely father somewhere in Iran who would be missing and pining for his daughter.

Of course Raja Bahrin has written his side of the story and so did Jacqueline Pascarl. Books are not only an income earner but more importantly they tell your side of what had occurred and who had been the rotten side. If their short-term tragedy is to be made into a film, I could volunteer to play Raja Bahrin but I want Nicole Kidman to be Jacqueline Pascarl – and I would want the film to focus not so much on the ‘kidnapping’ but more on the happier early years of Raja Bahrin and Jacqueline Pascarl.

But seeing a well mannered and mature Shahirah on TV reunit 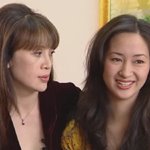 ed lovingly with her mum (the love between them was evident on TV), talking sweetly and confidently without any bitterness, I have to say the credit must go to Raja Bahrin for bringing his kids up well without poisoning their minds and allowing them to still love and be re-united with Mum. Well done, Dad!

And well done too, Shahirah for showing Aussies that a Muslim upbringing hasn’t diminish the sweetness you obviously have plenty of.

Oh, please excuse me – some damn thing got into my eyes!
Posted by KTemoc at 9:31 pm