War of the Dogs

Australia provided 42 West Papuans (Irian Jaya Barat) with refugee visas which made the Indonesians wild with rage. They demanded that Australia, as a good neighbour, must repatriate those Papuan Indonesians refugees to demonstrate its oft-stated claims of respecting Indonesian sovereignty over West Papua. That's like asking Malaysia to repatriate Thai Muslim rebels to Thailand just before the Pengkalan Pasir by-election - except that Australia is perpetually on election footing because general elections are held every 3 years.

Indonesia has been very suspicious of Australia ever since it lost East Timor, with many Indonesians including high powered personalities believing Australia had manoeuvred East Timor into its independence from Indonesia.

Nothing could be further from the truth. The culprit for opening the gates to East Timorese independence was President Habibie, whom his successsor Abdurrahman Wahid, known popularly as Gus Dur, called 'mad'. Gus Dur made a joke about presidents before him as follows: Sukarno was mad about women, Suharto was mad about money, but Habibie was mad, just mad.

Habibie, one of Anwar Ibrahim's SE Asian Muslim intellectual colleagues, was a real loose cannon, springing a referendum on East Timorese about their wish for independence from Indonesia, catching everyone including the Australians by surprise.

The Aussies groaned when they heard of his crazy decision, realising that Australia would be involved in something they didn't really want, because it would involve lots of Aussie money, unaffordable Aussie military as well as reconstruction support (the Australian public have very strong feelings for the East Timorese because of their help to Aussie soldiers during WWII) and unavoidably offending Indonesia.

Now many Indonesians suspect Australia of also fermenting rebellion among the West Papuans, which is of course nonsense. Even the President of Indonesia knows that but he has to act to please the rightwing nationalists. He recalled his ambassador to Canberra.

I have always felt that West Papua should never have been allowed to be absorbed into Sukarno's Indonesia but the USA allowed its Cold War and, to a lesser extent, business interests to gravitate towards Sukarno's megalomaniac aspiration, forcing the Dutch surrender its colony to Indonesia.

The Rakyat Merdeka, an independent newspaper, is owned by the country’s largest media group, Jawa Pos. The newspaper has a hard hitting and very abrasive style, with articles and caricatures that frequently strongly criticized the political establishment.

In September 2003, its then chief editor, Karim Paputungan was jailed for five months for insulting the speaker of the lower house of parliament, Akbar Tandjung. It showed a caricature of Akbar Tandjung, shirtless and dripping with sweat, trying to appeal his corruption conviction for embezzling US$4.5 million from a state owned company, Bulog. Tandjung was found guilty of corruption and sentenced to three years’ imprisonment, but then remained to appeal to the Supreme Court and continue in politics. Like in Malaysia, some politicians are more equal than others.

Then in February 2004, the Indonesian courts again jailed its daily editors for insulting Megawati and guess who, Akbar Tandjung

Rakyat Merdeka had also put the controversial caricatures of Prophet Mohamad pbuh on its website, purportedly to illustrate the story about the uproar but it attempted to ameliorate the impact by covering teh prophet's eyes with a red banner.

Obviously this is one newspaper the Indonesian government would have difficulty controlling.

Recently it printed a caricature of PM John Howard and his Foreign Minister Alexander Downer as copulating dingos (Australian wild dogs) under a palm tree on an island signposted 'Papua', with a dialogue bubble from John Howard saying "I want Papua!! Alex! Try to make it happen!" implying Australia's ulterior designs on Irian Barat.

John Howard and Alexander Downer said they respect the freedom of expression of the Indonesian press, but reiterated Australia's recognition of Indonesian sovereignty over Irian Barat. 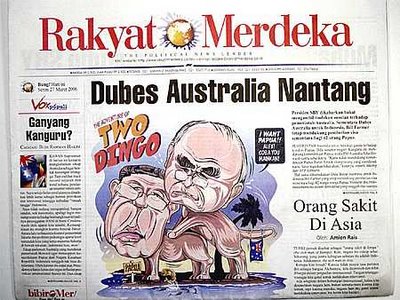 Other Indonesian newspapers like the English-language Jakarta Post jumped on the caricature bandwagon and showed a furious Indonesian eagle staring at a kangaroo hopping away with the bird's chicks in its pouch flying a Papuan independence flag, obviously representing Papua. The caricature showed the kangaroo saying "Don't worry, it's just temporary."

Such provocative scenes have aroused protesters to rally outside Australia's Jakarta embassy, vandalising its walls with painted obscenities. Protestors carried banners showing an eagle swooping to grasp the bloodstained neck of a kangaroo, while they shouted "Die kangaroo". I think we can work out what those represented.

Haven't you all guess the root cause of all these yet? Yes, it's the Year of the Dog! Arf Arf Arf! 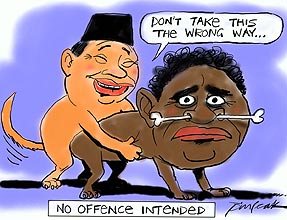