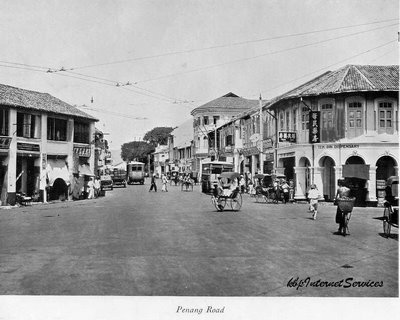 use of photo with kind permission of kbp Internet Services
This was Penang Road in 1932, before any of us was born. OK, some features existing currently or in the not-too-early past may not be present in this '32-era photo, but let's see whether we Penangites or those who are students of Penang history can work out what should be on this special road that lies in the heart of Penang - where necessary, let's factor in features that we are or have been familiar with. I suspect our task may take a few postings. Please correct me where I am wrong as I take you along with me on a stroll down Memory Lane (excuse the pun)!

The photo shows Penang Road going towards the Jalan Prangin-Burma intersection and eventually ending at the crossing with Jalan Dato Keramat-Macalister, with that timeless feature, the Craven-A [or aw ngiow] restaurant.
Thus the photographer in snapping this shot was standing on the northern part of Penang Road, where there used to be a spit of land jutting out to the circle or roundabout [obviously not yet built in 1932] in front of Odean Cinema just to the right [outside the photo frame].
Chulia Street or what new name it holds today [postscript note: just learnt it's now Lebuh Muntri] - I've lost touch with all the renaming - would be on our left, while there was a lane between Chulia Street Lebuh Muntri and the spit of land we just mentioned - I think there was a Bai Mosque, not that the Bais - meaning 'elder brothers' in the Punjabi language, and therfore referring to Sikh Malaysians - are Muslims.
But Penangites called Punjabis incorrectly as Bengalis, thus the Bengali mosque was at times referred to as the Bai mosque.
I think it could well be one attended by Pakistanis or (true) Bengalis, or more correctly today, Bangladeshis. I racked my rusty memory of Penang to obtain a name for that lane and somehow both Argyll and Leith jumped up - any connection, my dear Penangite kinfolks? 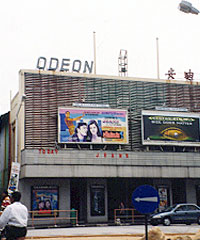 The Odean cinema holds terrible memories for me. But before I go into that, a few years ago I heard that the cinema was closed down on 30 April 2001. There were moans of sadness, including mine, as the historical building seemingly was allowed to deteriorate.

A bit of history about the name Odeon. This very popular cinema name had been based on the ancient Greek 'Odeion', as the huge open air theatre at the foot of the Acropolis in Athens was called. But other popular amphitheatres of ancient Greece were similarly titled.

Our connections with the British saw this name reached Malaya (later Malaysia). In Britain, Odeon was used as a name for cinemas after Oscar Deutsch, founder of the Odeon Theatres circuit, adopted it, allegedly on the recommendation of a friend who first saw this appellation in Tunis. His friends teased him that the name Odeon stood for ‘Oscar Deutsch Entertains Our Nation’.

After he died in 1941, his widow sold all his cinemas to J. Arthur Rank of the famous Rank Organisation, who also bought, but managed separately, Gaumont-British Cinemas, becoming the largest cinema circuit in Britain.

Apparently by 1937, there were 250 Odeons in Britain. When I went to UK for a course, I heard from a British friend that there was a Odeon cinema near Marble Arch, which had the largest cinema screen in London. A friend reminded me that Malaysia Hall was first located in Edgeware Road, near Marble Arch, but to be frank, my memories of Malaysian institutions in Britain or London are rather dodgy today. While in Britain, I learnt how to drink (warm) beer so most of my time were spent in alcoholic mist.

I do not know when the Penang Odeon was built, but I heard it has been re-opened as a Bollywood speciality cinema with a new name of Veenai Odeon. Those of you still in current touch perhaps could be kind enough to update yours truly. 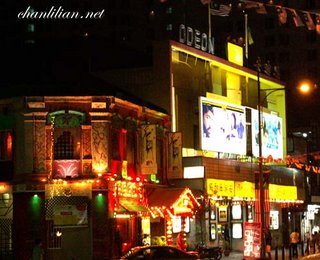 photo by Lilian Chan from www.flickr.com

OK, so on to my terrible memories.

There, at this cinema on Penang Road, I was dumped not once, but twice on movie dates by girlfriends - different bitches, if that's any face-saving consolation for poor ole kaytee ;-)

The first experience was very hurting as I was still young and tender [in my naive innocent 'virgin' heart]. She was my first love, went to KL after school to fill a temporary job [uncle fixed that for her], came back 3 months later, but by then decided she was too good for a backward Penang hick like me (sob!), so dropped me without warning on our first (supposedly) date after her return from KL.

I was utterly devastated. I went home rejected and dejected with two unused tickets which for some masochistic reasons, I kept for several years, together with her photo, to torment myself. From that day I lost total contact with her. She obviously didn't want to have anything to do with one lovesick forlorn ulu (daggy) Penang bloke and must have taken measures to erase any tracks or leads to her new life.

The second incident wasn't too bad. Met a girl at a bar, got on rather well, agreed to meet the following day at Odeon for the evening movie. She didn't turn up, apologised later that she forgot our date, claimed she had too many beers the previous night, blah blah blah!

Apart from my hey-ho attitude towards her, by then I grew on much thicker skin. I was also smart enough that time not to buy the tickets until the date showed up. Only annoying thing was I missed about 5 minutes of the film waiting for her. Oh yes, I did date her subsequently but I kept clear of the Odeon cinema when I was on dates with the girls, much as I loved the place.