A Bridge Too Far - Act of Wise Monkeys 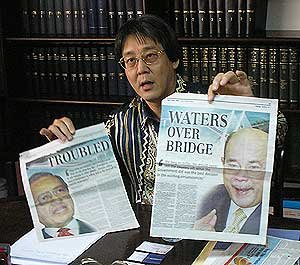 Matthias Chang, former press secretary to Dr Mahathir, said PM Abdullah Badawi should not be blamed for the bridge fiasco because he was surrounded by ‘bad advisers’. He assured everyone he was not criticising Abdullah but merely wanted to reveal facts about previous bridge negotiations to everybody so that the people could come to a rational conclusion.

He stated: “I was very surprised that during the course of the negotiations between Singapore and Malaysia, some key facts had been muddled, misrepresented and totally ignored.”

“I was the former political secretary to the former prime minister and I can say without fear of contradiction that I have detailed knowledge of the issue.

“I was tasked by the (former) prime minister to do all the critical research and conduct a review of the negotiating strategy between Malaysia and Singapore.”

He then showed 14 volumes of documentation comprising over 1,500 pages related to the negotiations over the bridge. He confirmed that the documents were submitted to the Foreign Ministry, previous law minister Rais Yatim, the Attorney-General’s Chambers, the Malaysian ambassador to Singapore, the Queen’s Counsel engaged by Malaysia and other relevant officials.

If that was the case, when then didn’t any of the personalities in the current Malaysian cabinet mention anything?

I had read from Malaysiakini that foreign minister Syed Hamid told reporters:

“We have never been given any wrong sort of (legal) advice, we knew from the start that there can be (a bridge). We are also confident that if we had gone to the (international court) or if we faced legal action, we would have succeeded.”

But Chang provided a different picture (which I haven’t read about) that Syed Hamid said the bridge plan would not have worked. Chang demanded to know why the minister had remained silent for so long.

Chang asked: “If that was the situation, why did he continue the negotiations for three years since 2003? Why didn’t he tell the former PM or me, the political secretary, that the plan would not have worked anyway in 2003 before (Mahathir) retired?”

Chang mentioned another news report where Syed Hamid said there would be legal implications if Malaysia wanted to bulldoze through its ambitions, Chang lost his cool and asked:

“You (Syed Hamid) are the chief negotiator and you are saying your strategy is to bulldoze. Since when had Malaysia ever bulldozed anything?” 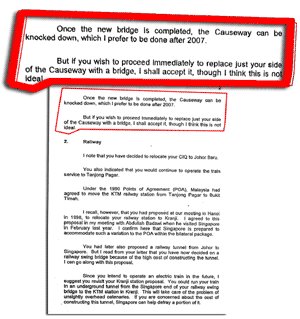 Chang distributed copies of Goh Chock Tong letters to the media. In one of the letters dated April 11, 2002, Goh, who is now Singapore’s senior minister, wrote to Mahathir:

Chang said the letter confirmed the former Singapore premier was in favour of a full bridge, so, Chang demanded to know: “How the hell did it come to this situation?”

“Syed Hamid should resign. Since when did we bulldoze Singapore. He does not know his facts, he didn’t even master the facts before negotiating. So where are the legal impediments? We have no legal impediments.”

“This man doesn’t know his job, quote me on that. And I challenge him to sue me. If he had read this letter (from Goh), can he as foreign minister and chief negotiator in his statement to the press, say that our strategy is to bulldoze?”

Chang also reminded everyone that the former Singapore premier had not mentioned anything about giving sand or allowing their air force aircraft access to Malaysian airspace in his letter.

Well, KTemoc has his own theory, that someone who is on friendly terms with Singaporeans could have advised the Singapore government to raise the sand and airspace issues which brought about the cancellation of the bridge project and in turn the humiliation of the DPM Najib.

It’s a wonder when so many people know of the Singaporean agreement to the bridge construction (as indicated by Matthias Chang when commenting on the 14 volumes of bridge negotiation documents Under Dr Mahathir), not one had raised it until Dr Mahathir and now his former press secretary Chang came out swinging.

There’s plenty of wise monkeys who see nothing, hear nothing and say nothing! Are they scared of someone?

photo/picture credits to Malaysiakini
Posted by KTemoc at 6:03 am