How do Muslim astronauts pray in space? Malaysia's National Space Agency is holding a conference to consider such questions as the country prepares to send its first citizen into orbit.

The astronaut will also visit the International Space Station, which circles the earth 16 times in 24 hours, so another thorny question is how to pray five times a day as required by Islam, she [Angkasa's director-general, Mazlan Othman] said.

Muslims also have to turn towards Mecca to pray and working out which direction that will be while hovering above the earth might also be challenging.

The two-day Islam and Life in Space seminar will begin next Tuesday and brings together 150 scientists, astronauts, religious scholars and academics.

An official from the Malaysian Astronomy and Islamic Law Association said the gathering would be the first time the Islamic world mulled life in space.

Look, KTemoc doesn’t mean to be a spoilsport, and pull the rug from under the statement that “…the first time the Islamic world mulled life in space …” because 20 years ago a Wahhabi Sunni, from Saudi Arabia went into space with an American spacecraft, the space shuttle Discovery.

He’s Prince Sultan ibn Salman ibn 'Abd al-'Aziz Al Sa'ud of Saudi Arabia, the first Arab, the first Muslim and the first member of royalty in space on the space shuttle Discovery. Maybe Malaysia's National Space Agency ought to contact him for some advice. 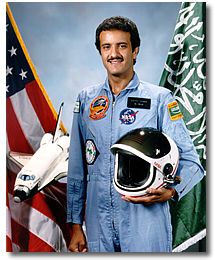 Extracts from the writeup in Saudi Aramco World:

Prince Sultan, a 28-year old graduate of the University of Denver - with a degree in mass communications - and a trained pilot, was picked to be the first Arab in space after a search of several months. Because the Arabsat organization was to have its second satellite launched by NASA during the June flight, its 22 member countries were permitted to select a payload specialist to travel aboard Discovery, and Saudi Arabia won the slot.

In another first, Prince Sultan sighted - and photographed - the new moon from above the earth rather than on it; this is important in Muslim life because the sighting of the new moon at the end of the Muslim month of Ramadan signals the end of the Ramadan dawn-to-dusk fast and the start of the joyous Id al-Fitr holiday.