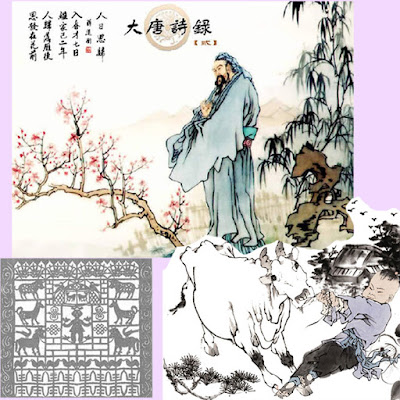 Since time immemorial, Chinese believe human beings were created on the 7th day of the 1st lunar month of the new year.

It seems the belief has been that in the 1st lunar month of a new lunar-solar year, the following creatures were created:

7th day - human beings, hence this day (today 03 Feb 17) is viewed as the common birthday of all human beings.

Much later, during the Western Han Dynasty (206 BC – 9 AD), it was believed that on the 8th day, cereal was created.

'Twas mythologised that it was Nüwa (女媧) the daughter of the Jade Emperor (numero uno in the Chinese heaven).

She was also known as a snake goddess, and credited with the destruction of the Shang Dynasty because its last king of that dynasty, Zhou, on visiting her temple was so taken by her beauty that he wrote a poem containing lustful obscene words on her exquisite pulchritude.

She was furious with his lust and disrespect and decided Zhou would be the last ruler of the Shang Dynasty.

We are told that Nüwa summoned her three subordinates, a Thousand-Year Vixen (later becoming Daji), a Jade Pipa, and a Nine-Headed Pheasant, all supernatural beings.

She instructed them to destroy Zhou and his Shang Dynasty, saying:

"The luck Cheng Tang (1st King of Shang Dynasty) won six hundred years ago is dimming. I speak to you of a new mandate of heaven which sets the destiny for all. You three are to enter King Zhou's palace, where you are to bewitch him. Whatever you do, do not harm anyone else. If you do my bidding, and do it well, you will be permitted to reincarnate as human beings."

And with these final instructions of wrath, Nüwa would never be heard of again. The Shang Dynasty's fell shortly after.

It's not nice to kill someone on his or her birthady so Chinese avoid killing chooks on 1st day of the Chinese new year (which our Confucian teachings contradicted by suggesting we offer our ancestors a steamed chook, wakakaka), babi on the 3rd day (unless you're a Hakka or Korean, then you should avoid slaughtering Fido on the 2nd day, wakakaka), and so on and so forth.

Since the 7th day of zhengyue (1st Moon) is the birthday of human beings, Chinese in ancient times avoided punishing or executing prisoners on this day. 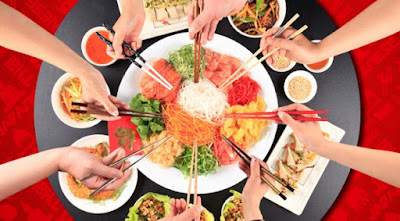 Malaysian and Singaporean Chinese were known to use 'seven-colour sliced fish' instead of 'seven-vegetable soup', in what we Malaysians know as 'yee-sang' (魚生) as in the popular tossing of yee-sang which Mahathir, Anwar, Ah Jib Gor etc are familiar with, wakakaka.

But today, in modern times, Malaysians ignore traditions and move the tossing of the yee-sang 7 days forward to the 1st Day of Chinese New Year. The ceremony has been politicised and regularised as a must-do for political leaders of our nation.

What a lovely muhibbah Malaysian custom. Trust the bloody Chinese to think of it, wakakaka.