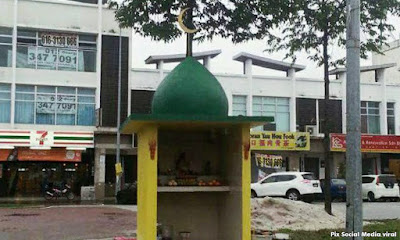 The Klang Municipal Council (MPK) demolished a shrine with a mosque-like dome in Jalan Makyong 5E/KU5, Bukit Raja near Shah Alam today after it was built without approval from the Klang District and Land Office. [...]

"This shrine is built on government land ... MPK had ordered the owner to relocate or demolish the structure, the owner had also promised to do so after Chinese New Year. However, no action was taken until last night," she said in a statement in Shah Alam.

As such, Norfiza said MPK and the district office, with the assistance of the police carried out the demolition in accordance with the Drainage and Building Act for building a structure on government land.

What it probably was, in my best guess, would have been a 'Datuk Kong' shrine, one of a local guardian spirit (of a Malay - hence the honorific of 'Datuk' while 'Kong' is just a Chinese title for a deity or spirit) usually worshipped or patronised by mostly Chinese, though in some cases, Malays and Indians have been worshippers too - well, at least Malays from an earlier time as today they would be horse-whipped for such alleged apostasy.

Naturally Chinese who are Buddhists, Confucianists and Taoists would frown on worship of a roadside shrine housing a local guardian spirit.

Buddhists do not worship any gods but rather pay homage to Lord Buddha, Arahants and Boddhisattvas (the last two being those who have supposedly attained nirvana), while Confucianists pay homage to Kung Tze himself and the spirits of their own ancestors, hence Confucianism is sometimes described as 'ancestor-worship' or more correctly 'showing reverence for ancestors'.

For Taoists a 'Datuk Kong' does (or did) not even belong to mainstream Chinese deities, and is thus outside the domain of Taoist beliefs and not to be followed or revered.

The worship of 'Datuk Kong' has been mainly by Chinese animists or followers of folk religions, but who are sometimes so confused with their religious affiliations, especially in Malaysia, that they describe themselves (incorrectly) as Buddhists, Confucianists or Taoists, especially the last.

Usually at a Chinese temple, a 'Datuk Kong' shrine lies outside the temple house, indicating it does not belong to the rank or pantheon of Chinese deities.

Now, as alluded above, the majority of 'Datuk Kong' worshipped all over Malaysia, especially in the Peninsula, would be Malays who were once holy men, famous warriors, renowned healers, etc.

There are reputedly a couple of Chinese 'Datuk Kong' but I have never personally seen any shrine dedicated to them, well, not in Penang or Kuala Lumpur anyway.

In Penang, there was a Malay saint or spirit (Keramat) said to be worshipped by one of the Malay settlements on Penang (or as it was then called in pre British days, Pulau Kasatu) prior to British development of the Isle. At that time, the shrine was only accessible by river which I believe was the Ayer Itam River.

But with decades of developments and accompanying environmental desecration, pollution of and channelling away of water from the Ayer Itam River for industrial use, especially in the last 40 years during the previous state government (1969 to 1988, and so far not yet ameliorated by the present state government), the river is now almost depleted of its once plentiful flowing water and thus useless as a form of travel.

Thank goodness for the presence of a road built near the shrine, namely, Jalan Dato Keramat, which was obviously named supposedly in honour of the same Keramat.

I heard the Keramat shrine has been moved away as the mosque along Jalan Dato Keramat (where the shrine was) sold its land away.


The above example of Datuk Panglima Hijau is one of several 'Datuk Kong' in Peninsula Malaysia. I wonder whether it was built by Chinese?

Apparently Datuk Panglima Hijau is reputed to be the 4th ranking spiritual 'Datuk Kong' in Malaysia.


There are probably dozens and dozens of 'Datuk Kong' worshipped by Chinese animists in Peninsula, but the 9 best known 'Datuk Kong', according to their seniority from the eldest to the youngest, are:

I'm not exactly sure which would be our Datuk Keramat in Penang, or perhaps he would be unique and different?

Incidentally, in Penang they have been also known as 'Natuk Kong', which mispronunciation has more to do with the Chinese inability to pronounce words with 'D' (hence in pinyin, 'T-words' without aspiration in their pronunciations is written as 'D' as in 'Da' for 'big').

The Chinese are more inclined to mispronounce 'D' as a nasal 'N' which could be good for Penangites learning French, wakakaka.

Votive offerings in worship of 'Datuk Kong' must be halal, though we needn't bother about JAKIM's halal certificate, wakakaka.

Chinese worshippers would never ever use haram foodstuff etc, in exactly the same honest way a Chinese who uses a joss bundle* (of joss sticks, paper money, oil, etc) at a Chinese temple would never ever forget to pay before he leaves the temple.

* at Chinese temples, joss bundles and bottles of oil may be taken for use without any permission or prior payment, but payment for those items are 100% guaranteed, for no worshipper would dare cheat.

What use is a prayer if one cheats the temple? It's like cheating a deity or spirit.

Only some people from the East Coast of Peninsula would do that, wakakaka.

Anyway, back to our roadside shrine in Klang - some too-clever-by-half bloke must have added the mosque-like dome plus a crescent & star insignia to the shrine in thinking the 'Datuk Kong' that's worshipped there might feel more at home, wakakaka.

He should have known better as Muslims in Malaysia are easily confused.