KUALA LUMPUR, Feb 21 ― After the clergy class drove the so-called progressives out of PAS in the 2015 party election, the Islamist party’s new leadership has since revived calls for Shariah rule in Malaysia.

For almost three years, Malaysia's oldest opposition party had seemingly made its ambition for the implementation of hudud laws in Kelantan ― which some believe is the reason behind its move to table a private member’s Bill in Parliament aiming at elevating the Shariah Courts' punitive powers ― as its sole preoccupation.

Such perception is strengthened by the leadership's seemingly lackadaisical attitude towards other crucial issues like rising costs of living and corruption.

In Parliament, PAS MPs are almost absent in all key policy debates. Apart from religious issues, observers say the new creed of PAS leaders has yet to make a mark intellectually or economically.

Political observers say these factors have given the view that PAS is a party with no capacity to tackle complex issues some truth.

If you vote for PAS, that's what you get - a party with no concern about important social issues such as rising cost of living, corruption, etc, and worse, with no capacity to tackle complex issues that matter for the socio-economic-security aspects of the rakyat.

Another bedevilment for those who voted for PAS has been the observation that In Parliament, PAS MPs are almost absent in all key policy debates.

But more importantly, how are those who voted for PAS represented in parliament on policy debates that could affect their lives, children and livelihood?

Kaki makan gaji buta - No wonder PAS exco members in Selangor has shamelessly put on their thick skin to say they refuse to vacate their Pakatan-appointments.

Their argument has been that they were elected by the rakyat to do their duty, but they conveniently forget that their appointments and associated duties were as Pakatan appointed excos, and since they have disavowed their membership in Pakatan, then by the grace of Allah swt, they should be honourable and leave the Pakatan exco positions. 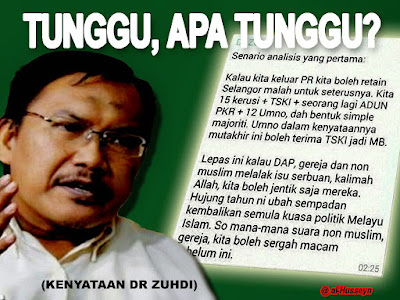 Their shameless exhibitions have been exactly like what occurred in Penang when those PAS members, appointed to various state positions prior to the breakup between PAS and DAP occurred, had to be dragged away crying, wailing and screaming.

There was also Hadi Awang who threatened another May 13 if Penang were to hold local elections, and that was probably because he feared PAS members won't be elected whereas without state elections they would be appointed (via Pakatan sharing formula).