I am Dr Secularity

MM Online about Islamic academic telling Muslim politicians not to contest if Malaysia is deemed a secular nation (extracts): 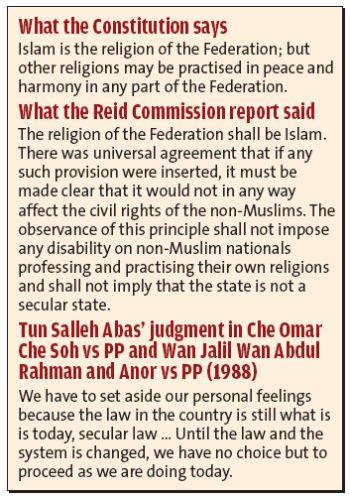 KUALA LUMPUR, Feb 18 ― People who believe that Malaysia is a secular nation should not be allowed to contest in the upcoming general election, a Muslim academic said today.

“We must defend Islam. The devils (hantu-hantu) who feel that our country is secular, make sure that in the 14th general election, we throw away all these devils from the Parliament.

“Anyone who feels this country is a secular nation have no right to contest in the next general election,” Prof Datuk Mahamad Nader Disa said in his speech at the Himpunan 355 today.

Mahamad said that the country's Federal Constitution also does not mention Malaysia as a secular nation.

“All of you go home and be firm with this stand. Convey to all Muslim voters in your area. Make sure there is no more of those with secular thoughts being sent to Parliament later,” he added. 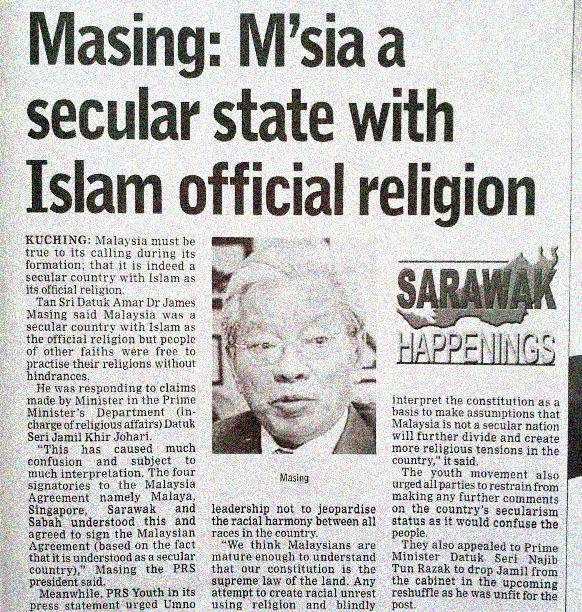 My dear Prof of whatever (wakakaka),

Take for example, the syariah courts are SUBORDINATE to the civil (secular) courts, and limited or restricted to trialing ONLY Islamic moral and family laws, BUT not criminal or constitutional laws.

It's a small sub-branch of the national judiciary with limited duties and powers, unlike the secular civil laws which can trial criminal and constitutional issues. Thus secular civil courts rule supreme in Malaysian judiciary.

Furthermore, syariah courts are limited to court punishments they can award for offenders of Islamic morality laws such as khalwat, adultery, drinking alcohol and not fasting during official fasting periods and such likes.

Those Islamic morality issues (mentioned just above) are not criminal offences in the civil jurisdiction and unless someone drive after drinking beyond police prescribed upper limits (80 milligrams per decilitre or 100 millilitres) which is considered dangerous driving or sometimes referred to as driving under the influence of alcohol (DUI), it's not a criminal offence for non-Muslims to yamseng, wakakaka.

Syariah courts are only allowed to pass down punishments for offenders fo Islamic morality issues up to what is popularly known as 3-5-6 (3 years imprisonment, RM5000 fine, 6 strokes of caning).

OTOH, secular civil courts have unlimited latitude in the punishments they can award, including up to the death sentence, the last of which syariah courts are NOT permitted. In fact, to reiterate, syariah courts may NOT trial criminal offences.

So which is far more superior, the Islamic syariah courts or the secular civil courts? 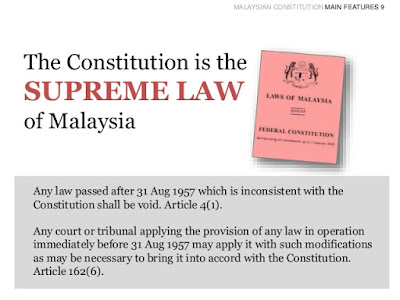 Do not be confused by some civil court judges who are Muslims and deferred to the jurisdiction of syariah courts especially on cases like custody of the child of mixed marriages (between Muslim and non-Muslim).

As a former AG and once Suhakam Chairman Abu Talib was reported to have said, when informed by human rights lawyer Malik Imtiaz that some civil court judges, the moment they detected the faintest whiff of any Islamic element in a case, even though the Islamic connection wasn't the core issue, they would freeze into gutless abdication of their judicial responsibility:

Abu Talib accused the civil court judges of worrying about their promotional prospects as the possible reason for lacking the courage. He said: “The courts have failed to do so (interpret boldly) for the slightest unreasonable reasons in many cases where Islam is merely seen on the surface.”


Anyway, back to topic, the limitation of punishments permitted to syariah courts a la 3-5-6 has been the precise reason PAS party president Hadi Awang has proposed a private members bill to increase the punishments allowed for the syariah courts from 3-5-6 to 30-100-100, namely: 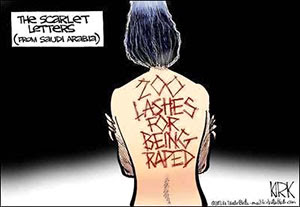 But hasn't the very fact of Hadi Awang passing a Bill to amend Act 355 for parliament's approval showed clear evidence of the subordinate nature of the syariah courts, in that they need permission to increase whipping from a mere 6 to a scary horrendous 100 lashes of flogging?

If Malaysia is an Islamic nation as fantasized by you my dear Prof of whatever (wakakaka), then Hadi Awang's private member's Bill to amend Act 355 is totally irrelevant, and full Islamic laws would have displaced civil laws long long ago, say, in 2001 when Mahathir declared Malaysia as an Islamic State, and one year later in 2002 when he further announced that Malaysia was not only an Islamic State but a Fundamentalist Islamic State. 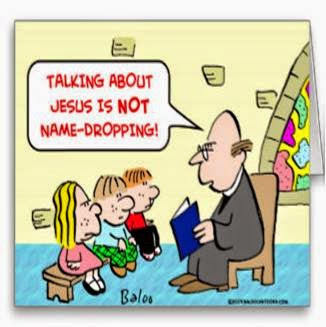 See what Lim Kit Siang said regarding that in his post on Mahathir's 617 & 929 Declarations. Don't ask him as he mudah lupa macam Melayu, wakakaka.

So my dear Prof of whatever (wakakaka), suck on the indisputable FACT that Malaysia is a secular nation, which time over time again had been attested to by the Lord Presidents of our Judiciary.

Mahathir was not a judge, let alone a Lord President (latter re-named Chief Justice of the Federal Court, but seen as a downgrading of the Judicial post and the Judiciary)*. 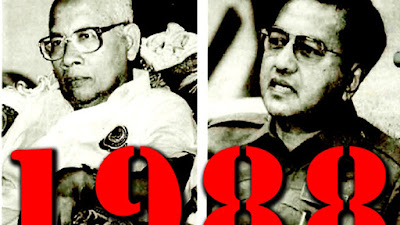 In 1988, Lord President Tun Salleh Abas was brought before a tribunal convened by the Prime Minister Dr Mahathir Mohammad on the grounds of misconduct. The Supreme Court in the years leading up to 1988 had been fiercely independent and increasingly active, and was at the time due to hear an appeal to determine the future of the ruling party UMNO, which had been declared an illegal society by the High Court of Malaya on the grounds of procedural irregularity.

As a result of criticisms of the judiciary made by the Prime Minister, a letter of protest was written by Tun Salleh to the Yang di-Pertuan Agong on behalf of the judiciary. This letter was later used as grounds for the convening of the tribunal.

When the Supreme Court granted an injunction prohibiting the tribunal as constituted from hearing the misconduct allegations, five Supreme Court Justices were suspended (and two were subsequently removed), and the injunction overturned.

The tribunal later removed Tun Salleh from the office of Lord President, in which office he was succeeded by the then-Chief Justice of Malaya, Tun Hamid Omar, who had been the chairman of the tribunal.

The 1988 constitutional crisis was widely considered to be the greatest blow to judicial independence in Malaysian history, and at the time led to the Bar Council of Malaysia refusing to recognise the new Lord President. Around the same time, the Federal Constitution was amended to disvest the courts of the "judicial power of the Federation", granting them instead such judicial powers as Parliament might grant them.

Renaming of the office

Indeed, as he had claimed a lot of other stuff like he did not know about or was ever involved in issues like Project Blue IC in Sabah, that he was not in Malaysia during Memali, Maminco, Forex, BMF, Perwaja, Ops Lalang, etc etc etc. 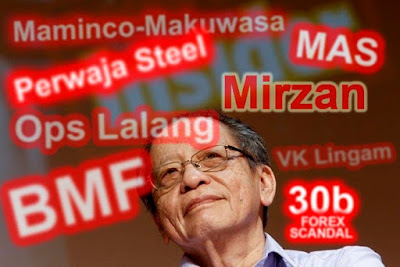 In the words of Dr Malik Munip, a former Member of Parliament for Muar and also who taught history at University of Malaya for two decades:

Though Malaysian Prime Ministers are vested with a whole battery of executive authority, nonetheless, they do not have the power to determine the identity of a country merely by making an announcement either way.

Indeed, if we think about it, even an individual’s identity cannot be determined by a pronouncement—a person doesn’t become a Muslim, a Christian, an apostate or any identity along the ‘faith- atheist’ spectrum simply due to a declaration. To have meaning and force, the declaration must correspond with the individual’s belief and practice.

Thus, my dear Prof of whatever (wakakaka), apart of the fact of the superiority of the secular civil courts over the Islamic syariah courts, the latter with limited powers and jurisdiction (only over Islamic morality issues but NOT criminal cases), do listen to the words of Tun Salleh Abas. 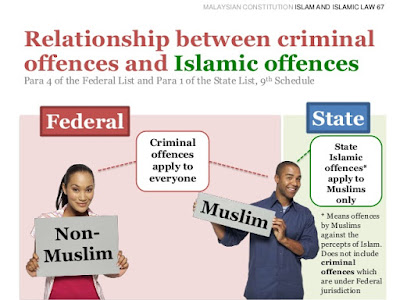 After all he was the top judge of Malaysia, until he was 'fixed' kau kau by 'someone'.

And since you do not want Muslim politicians, presumably PAS politicians since Hadi Awang is proposing the Bill to amend UUD 355, to contest in GE-14 as Malaysia is undeniably a secular nation, and those PAS politicians listen completely to you and obey to your urging, I promise that I will convert into a Muslim (with full sunat-ization), wakakaka.

Yours in secularity (wakakaka), 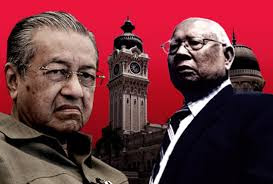 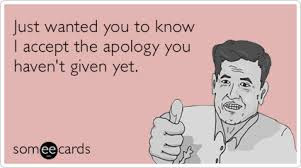 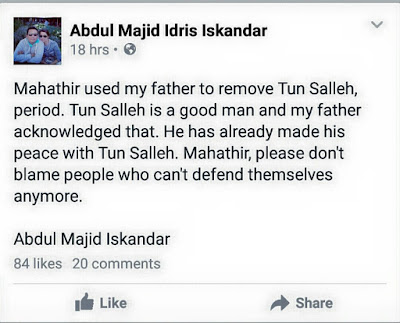