Negotiating with the Divine

Thaipusam is around the corner and what Dr Asri Zainul Abidin (nick Maza) didn't (perhaps still doesn't) like will inevitably happened, namely, the breaking of coconuts along Lord Muruga's procession from Koil Vedu, Little India in Georgetown to the Nattukottai Chettiar Temple in the Waterfall (Botanical Garden) area.

In 2013, he said of such Thaipusam processions:

"..... roads are not places for religious processions such as carrying idols and smashing of coconuts to the point of inconveniencing road users or messing up a public space, such as being carried out by followers of certain religions. If you want to streamline (the regulations), then do it for all."


Dr Asri was responding to Hindus' complaints about the Islamic ritual of slaughtering cows at a school in Selangor during Aidiladha that year (2013). He stated that while ...:


'... he agrees that schools are not appropriate venues for the Aidiladha cow sacrifice ritual, other religious acts in public places should also be similarly regulated.' 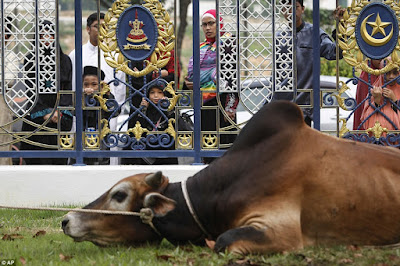 I had then replied on behalf of Hindus (wakakaka), saying in my post:

Come on lah, Dr Asri, where's the comparison between slaughtering live animals like cattle and sometimes even camels ... in front of young pupils and traumatising the kids, against the breaking of coconut fruits on roads which might have temporarily inconvenienced drivers.

Besides, all Thaipusam processions whether in Penang or Kuala Lumpur have been approved by the police who controlled traffic flows.

As for his claim that the ritual would mess up a public space (road), obviously, and strangely for a Penangite, he was not aware that once the Thaipusam chariot carrying Lord Muruga has passed, the so-called mess, namely broken coconuts on the road, would have been swiftly taken away by members of the public for their own use, like extracting santan (coconut milk) from the fruit, and even making use of the shells for fuel. 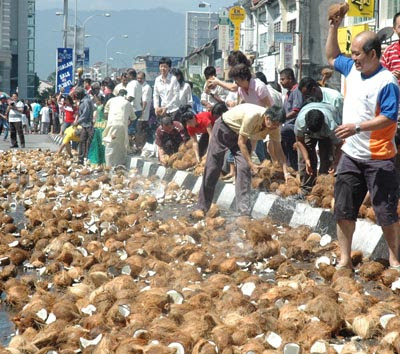 Dr Asri has been one of the ulama respected by non-Muslims for his general fairness and reason, and I am one of his fans, but alas, I didn't agree with him on that Thaipusam issue, because we were talking about traumatising schools kids with the bloody slaughter of live animals (ones which additionally are sacred to Hindus) while the other merely broke coconuts on a road, which would not be insensitive to other religions (unless you're Raja Bomoh who worships coconuts, wakakaka).

Anyway, this post is not about Islamic ritualistic slaughter of cows or Thaipusam per se, but rather the votive offerings by Chinese of coconuts to Lord Muruga.

Yesterday the Star Online published an appeal by CAP (Consumer Association of Penang) for devotees to refrain from offering thousands of coconuts during Thaipusam when one fruit would do. An extract of that article is as follows:

In a press conference yesterday, CAP education officer N.V. Subbarow appealed to devotees to smash only one coconut each and donate the money used for buying more coconuts.

“The money will bring more merit if it is given to the needy or for the growth of Tamil schools."

“Buying thousands to smash on the street and later throw in the dumpsite is not a Hindu practice."

“Whatever food items offered to God should be treated as a prasadam, to be consumed by devotees and not discarded.” 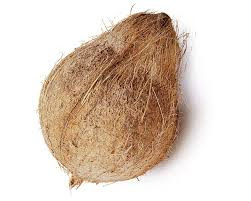 Small point of disagreement - as mentioned above, no one throws away the smash coconuts as the fruits will definitely be consumed as they have been for years.

But Subbarow made an excellent point, that of donating money in the name of Lord Muruga in lieu of offering thousands of coconuts as votive offerings, or to Tamil schools.

However, he has obviously been not aware of one characteristic of the devotees, namely, their wish to be "noticed" by the Divine One for their piousness. It's a case of "Lord, me me me".

I shall use the word 'negotiations' in that context, of devotees negotiating with Lord Muruga, though I have to say I wonder whether some Chinese devotees even know the Thaipusam procession commemorates the moment when the Mother Goddess Parvati (wife of Lord Shiva) gave her son Muruga (or Skanda or Kathikeya or Subramaniyam), who is the God of War, a divine javelin (Vel) so he could vanquish the evil demon Soorapadman. It has been incorrectly believed that Thaipusam marks Lord Muruga's birthday.

But Chinese devotees. while as pious as Indian Hindus, have a pragmatic nature. They would pray to the gods hopefully in return for blessings on their children, parents, selves and businesses.

They are no different from the Christians or Muslims or Jews who cried out "God please help me" except 'ni orang China is more practical, more specific and more business-like like, for example, "Lord, please bless my sundry-grocery shop and I'll break a thousand (or ten thousand) coconuts on Thaipusam."

And they like to 'negotiate' directly with the relevant god, rather than through clerics whom most don't have much respect for.

That's why those Chinese towkays and others prefer to break thousands of coconuts to Lord Muruga rather than donate money to charities which to them should be a different issue altogether.

But there is one possible way - recruit the most revered Chinese or Thai monk or Chinese Taoist priest to liaise with Hindu priests to jointly preach the superior option of donating to charities endorsed by Lord Muruga (or rather his mortal reps PHEB? or Nattukottai Chettiar Temple) rather than breaking coconuts.

I am sure Dr Asri too will be happy with such an option.

Don't ask me why Chinese in Penang revere some Thai Buddhist monks rather than any ordinary Chinese monks. Maybe they see too many episodes of 'Hui Sio Ang Lian See' (The Burning of the Red Lotus Temple) and have stop trusting Chinese Buddhist monks, wakakaka.

For more on 'The Burning of Red Lotus Temple', please refer to my Kongsamkok post here. 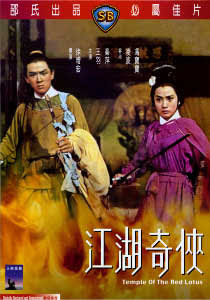