Datuk D. Murugan, also known as Ramesh, who holds a 25 per cent stake in Pelita Samudra Pertama (M) Sdn Bhd said he was disappointed with the criticism on him being a Hindu in a Muslim-majority company.

Ramesh said the issue has plagued him since 2012 when a newspaper clipping showing himself and then MIC president Datuk Seri G. Palanivel at a Hindu temple ground-breaking ceremony was doctored to show that the temple was erected in front of a Pelita outlet, The Star daily reported today.

The issue has since been shared again on social media, and Ramesh said many then questioned his involvement in the business in addition to accusing him of funding the construction of a Hindu temple using Pelita profits.

Responding to the issue, he told a news conference in Penang yesterday that not only all 25 Pelita outlets nationwide are halal-certified, but the company also has its own chicken slaughterhouse in Juru.

“Our restaurants are also closed an hour on Fridays for Muslim workers to perform their prayers,” he was quoted saying. [...]

Separately, Penang mufti Datuk Wan Salim Mohd Noor told The Star that Ramesh’s religion is not an issue with the Muslim-majority business.

“Ramesh’s involvement not only does not contradict Muslim teachings but is also good for the multiracial Malaysian spirit of supporting each other,” said Wan Salim.

The FB page above seems to belong to one Adida Harun who also posted: 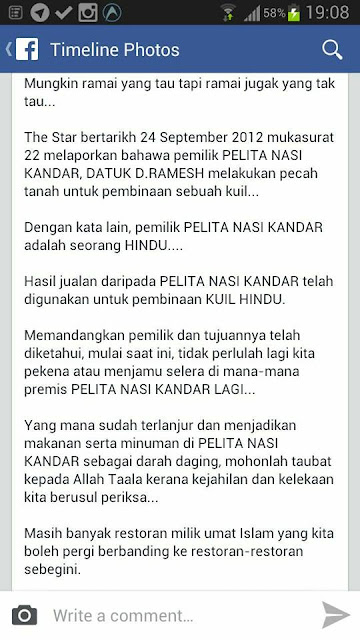 I'm sad to read above FB page. Ramesh only owns 25% of the business and is the only Hindu among 6 Muslim owners.

Besides, what religion Ramesh embraces is his own affairs and has nothing to do with his minority share of a Muslim-majority restaurant or chain of restaurants. Food in Pelita are halal with even its own approved slaughter house for chooks.

Furthermore, what he does with his share of profits from Pelita is his business. And that's basic business.

But the conniving photoshop image, conflating an image of a Pelita restaurant with an image of a Hindu ground breaking ceremony, plus the provocative caption on that FB page, would seem to be a piece of underhanded nastiness.

FMT stated: The photo was juxtaposed with the picture of the restaurant’s Jalan Ampang branch and a picture of a group of men receiving blessings from a Hindu priest. This gave the impression that Hindu prayers were being conducted outside the outlet.

It's vicious, venomous and vile, totally contrary to the mercy and compassion of Allah swt and a blasphemous insult to the righteous name of the Almighty swt.

Who wrote that text should be the one to bertaubat, and not Muslim customers of Pelita.

Given this dirty, divisive and destructive nastiness, I now begin to wonder whether non-Muslim donations to the construction of mosques would be a problem as non-Muslims have unwittingly contributed to such.

The Penang State mosque had donations from many well-known Chinese Penangites. Some of my family members have been among the less well-known donors.

Do we now remove some bricks and mortar from the mosque to a value equivalent to non-Muslim donations?

I hope Cik Adida Harun will be kind enough to post her recommendations to help solve this niggling concern of mine.

Omigosh, what if he was/is a Roman Catholic as it has been said that he was inspired by the design of the Cathedral of Brasilia. That's in Brazil, a wholly Roman Catholic country.

And good lord (excuse the pun), our Penang State mosque was based on the design of a Catholic Cathedral?

Admittedly the mosque was designed, constructed and completed well before the 'Reign' started in 1981, wakakaka.

Shouldn't we ask JAKIM what to do next?