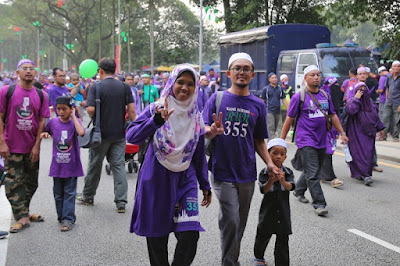 KUALA LUMPUR, Feb 19 — The police are investigating PAS’ “Himpunan 355” rally under the Peaceful Assembly Act (PAA) 2012 after they found that many participants had brought babies and small children along.

Dang Wangi police chief ACP Mohd Sukri Kaman said initial investigations revealed that infants and children aged between seven months and 15 years were present at the rally in Padang Merbok here yesterday, which he noted was an offence under Section 4(2)(f) of the PAA that prohibits one from bringing a child to an assembly.

“The case is still under investigation and no seizures or arrests have been made so far,” Mohd Sukri said in a statement.

In Dec 2008 (almost 10 years ago) I posted
Political campaigns - leave children out please in which I wrote:

I notice that there has been a growing tendency to use (or take along) very very young ones to political rallies and other including young kiddies in some candlelight vigils [eg. the one in Penang recently], following a rally or sending a subteen sweetheart to present the PM with bouquets of roses and whatnot.

[kt note: immediate above yellow-highlighted part describes a group of Indian Malaysians (Hindraf) using or misusing a 6-year old sweetie to handover a card, bouquet of flowers and a teddy bear to AAB in Putrajaya to demand the release of the five Hindraf leaders currently held under the ISA.

Incidentally I was informed the sweetie (by now sweet 16) was/is Vwaishhnnavi, the daughter of Hindraf Chairman Waythamoorthy who at that time cabut-ed to Mother England while his brother and 4 others were incarcerated.

When the 11 Hindraf people who were detained by the police, naturally Hindraf and sympathisers blasted the police for "arresting" a 6-year old kid.

The truth was the adults were detained but the kid tagged along her mum (Waythamoorthy's wife, Shanti) because it was her mum who took her along. This was probably how Hindraf misused a lil' sweetheart 'to tuck at your heartstrings' for political gains.

I personally don’t approve of putting such tender sweeties in harm’s way, especially more so with the known notoriety of our dear police.

I believe the parents of those kids so ‘assigned’ or taken along have been either very naïve or quite irresponsible.

While I support protest rallies including candlelight vigils on principles of freedom of expressions, I don't the misuse, unwitting or otherwise, of children for political posturing.

While Hindraf recruited a young sweetie in its political manoeuvre in Oct 2008, it was notably PAS members who have had a habit of bringing children along on protest rallies. As I blogged 10 years ago, they were/are naïve or and quite irresponsible to expose kiddies to the potential dangers associated with a political rally.

But in some way I can quite understand why some PAS members did/do that. It could be due to:

But what I couldn't and still can't tolerate have been:

The last especially would be an abysmal abusive atrocity in misusing/exploiting children for political purposes and tell on the total irresponsibility of some parents.

But mind, the former 3 possible causes do not excuse those parents (whether Malay, Chinese or Indian) from exercising some commonsense concerns for their kids' safety and well-being.

PAS has just done it again, namely, bring kids along. But does this mean that out of the claimed 300,000 people attending Himpunan355, 299000 were children?

Wakakaka.
Posted by KTemoc at 4:26 pm