The company that has been given the contact to build the ‘scenic’ crooked bridge half-way across the Straits of Johore is Gerbang Perdana. It was incorporated on Sept 26, 1998, and owned by a consortium of three shareholders – Merong Mahawangsa Sdn Bhd (60%), DRB-Hicom Berhad (20%), and Detik Nagasari Sdn Bhd (20%). The chairman is Tan Sri Razali Ismail and the managing director Datuk Yahya A. Jalil.

Gerbang Perdana has been given a 33-year concession by the government to design, finance, build, operate and transfer the bridge, which comprises five components: the bridge to replace the Causeway, a CIQ complex, new interchanges, road upgrading and a rail link.

In April last year, Malaysia's very own Humpty Dumpty threatened "If both sides [meaning the Malaysian & Singapore governments] fail to reach agreement, we will continue with this (contingency plan). We will demolish the Johor Causeway on our side of the border and from there, we will build the bridge which will be 18 metres above the sea level to enable small ships to pass through."

Demolish the Causeway? Wow! Is that the tactic to force the Singapore government into completing the other half of the ‘scenic’ bridge?

In 2003, DAP Lim Kit Siang asked why the bridge had to be meandered, making the length on the Malaysian side 3 times longer and thus 3 times more expensive that a straightforward (excuse the deliberate pun) straight one.

Perhaps it’s to make the view more ‘scenic’? But let's continue our discussions of bridges. 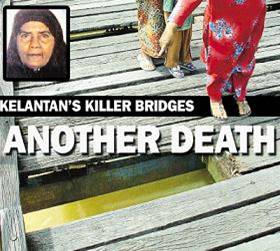 Related:
Malaysian 'Cynics' will have 'Scenic' Bridge to Nowhere!
Posted by KTemoc at 11:33 am