Under Koh Tsu Koon’s leadership (or more correctly, lack of), Penang, once titled the Pearl of the Orient, has deteriorated into a lump of scatological material. Of all Koh's failings as the Chief Minister of Penang, this has been the one that makes me most angry.

parks of our beautiful Island have all been battered real good. The once-pristine lovely beaches have been pockmarked by loud gaudy restaurants and shops. Incomprehensibly, hotels were allowed to be built right on the public beaches instead of slightly further inland.

Restaurants have mushroomed out of converted houses in the middle of residential areas. Illegal extensions have protruded out from houses like cancerous growth. Hawkers have defied municipality laws with impunity. Development has been helter-skelter-ish confusing and unpleasant. Almost everything and everywhere in Penang have turned filthy and disgusting. There seems to be a total lack of proper planning or order.

One Malaysiakini reader Neil Khor wrote in May 2005 about Koh’s leadership. He said:

“I doubt very much if Koh can even get our inner-city drains cleaned regularly without having to ponder on the political repercussions on his cabinet's position. This is indeed a sad reflection of a state and of an office that used to lead the way for other states in the federation.”

If you have time, do read Neil Khor’s letter which has a fair and balanced observation of how Penang has deteriorated. He has been more charitable than KTemoc, in not putting the entire blame on Koh Tsu Koon, but rather on Penangites as well for their lack of civic duties. Reader ganchan has also commented on the equal failings of Penangites.

As a Penangite, it hurts me to say I agree with them that Penangites have been terribly negligent of their surroundings, but as I commented in my earlier postings, Koh Tsu Koon as the Chief Minister has failed miserably to provide the necessary leadership. Koh has put himself forward as the political leader of this Island, has been elected so, and therefore must assume the greater responsibility for the State's failings.

Then Khor commented on a particular point that seemed to sum up Penang’s ill. I am very taken up by his acute observation because I have observed the same thing too which I lamented over during my last visit to Penang. Khor said:

“The beaches used to be clean, the drains used to have 'peacock-hu', the tourists used to come. But today, all these things are going (‘peacock-hu’ in the drains? The kids today will think you are crazy!).” 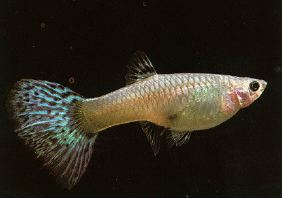 ‘Peacock-hu’ in Penang parlance is of course those guppies (poecilia reticulata). The beautiful guppy fish are actually bred by authorities in other countries to control mosquito larvae. The piscatorial delight is a very effective non-insecticide control of mosquito breeding, and thus mosquito-borne diseases. Ever wonder why today there are more mosquitoes than ever in Malaysia, with dengue fever and maybe one day malaria as well?

We Penangites had those beautiful ‘peacock-hu’ all over Penang’s waterways for free and in once-bountiful numbers, even in drains as Khor mentioned. Where are they now?

Penangites know that ‘peacock-hu’ could survive in the toughest water conditions yet they have disappeared, so just imagine how terribly polluted Penang’s waterways must be, that is, if waterways are still around. I have seen once-wonderful streams disappeared, all under Koh’s chief ministerial tenure.

Even the incredible viper snakes in Penang’s world famous Snake Temple have significantly disappeared, and so too have the siput (shellfish) from the beaches. When nature so speaks, it's time to be truly worried.

Some years ago, some smart alec thought it might just be great to have a zoo inside Penang's once-famous Botanical Gardens, so they have pens and cages and some poor kangaroos from Australia which unsurprisingly all died. Hellooooo, read my lips - BOTANICAL Gardens. What does that tell you, smart alec?

Why in the bloody world would we want kangaroos and caged creatures in a garden that was supposed to be the repository of our wonderful flora? That has been the same mentality that saw the Snake Temple board proposing to built a snake house inside the place of worship - isn't that just marvellous, for foreigners to see how the local religion abet clowns locking up wild creatures in cages in a place of worship?

That's the problem with Penang - no leadership, no understanding of core values, no clue as to what really attract visitors? The Penang goose that lays the golden tourist eggs has been slaughtered, grilled, barbequed, deep-fried and eaten away!

Really, for Penang to regain its once-beautiful, pristine and innocent glory, Koh Tsu Koon should go. He has had several years of opportunities but hasn’t had anything to show that’s praiseworthy. In fact, under him, Penang has become worse. He has let Penang Island and every Penangite down.

Just look at my numerous mention of once-idyllic, once-pristine, once-famous, once-beautiful, once-wonderful …….. and of course the once-bountiful 'peacock-hu'. I mention them with tears in my eyes - kid you not. Can Koh Tsu Koon give all these back to us?

Koh Tsu Koon as the new deputy president of the Gerakan Party should be promoted to federal ministerial rank. Penangites wish him the best and hopes he goes soon!