Democratic Action Party Member for Taman Seputeh, Teresa Kok, has spoken up for 3 women allegedly abused and sexually harassed by none other than the usual culprits, the Royal Malaysian Police. Teresa Kok was also accompanied by her legal counsel Sankara Nair, a former cop himself.

On a night 2 weeks ago, 48-year old Wan Nurizan, who works as secretary at a legal firm, was strolling down Petaling Street, Kuala Lumpur, with her 2 daughters aged 20 and 15. A plainclothes policeman at a stall confronted them. At that moment 3 policewomen, also in plainclothes, joined in. One of the women cops started to fondle the 20 year old woman’s buttocks.

The outraged mum demanded to know what the policewoman was doing this. The cop’s response?

That she was the police (which bloody meant that she could bloody do any bloody thing) and she wanted to check (the buttocks?). Mum asked why couldn’t such a demeaning search be done in other than a public place. The cop, obviously caught by Mum's verbal retort, then went aggressive and scolded them over the way they had dressed, according to the cop, like prostitutes. The cops also did their usual searching of handbags.

At the press conference with Teresa Kok and Sankara Nair, the 3 women wore exactly the same clothes they had worn that night. 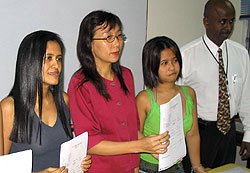 When the enraged Wan Nurizan demanded an apology, the policeman arrested them and took them to be locked up at a police station. In their process they claimed the police rough-handled them by twisting their arms behind their backs, causing them to scream out in pain. Their hands were badly bruised.

The next day an ntv7 news footage of their arrest was also allegedly aired where a police official described them as ‘tiga wanita samseng’ (3 female gangsters).

On Thursday, the police charged Wan Nurizan at the Kuala Lumpur magistrate’s court for ‘insulting behaviour’ under Section 14 of the Minor Offences Act. The fine for the offence can be up to a maximum of RM10,000. But Wan Nurizan plans to sue all those involved, including ntv7 for criminal defamation.

She asked: “Do I have to wear a tudung (head-scarve) in order not to be called a prostitute? These are my daughters that they are accusing of being prostitutes, how do you think I feel? It is our right to dress the way we do.”

Sankara Nair, as a former policeman, said that the police could have issued a summons on the spot for the alleged offence committed by Wan Nurizan. There was no necessity to arrest them. Wan Nurizan has the right to seek legal remedy for being subjected to such treatment. He questioned why the two younger girls were arrested when they did not commit any offence.

Nair was of course referring to the conduct of a theoretical well-trained and responsible police force of a democratic, responsible and publicly accountable nation.

Teresa Kok said what we all know - the professionalism (or lack of) of the police personnel involved in the incident were questionable, especially when they were in plainclothes and groping a young woman’s buttocks after accosting her in public. It was sheer sexual harassment through abuse of powers.

As for the groping, maybe the Federal Territory Islamic Religious Department (Jawi) could make itself useful for once and look into such strange police conduct by a police woman.