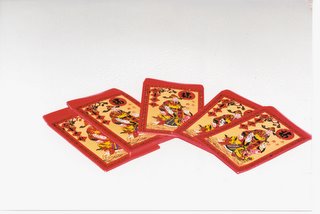 Clara Chooi of the Star Online has written an informative piece on ang pows (red packets) or as Americans termed them, lucky money that Chinese give on auspicious occasions like weddings, birthdays, etc. On those occasions, only the principal actors, namely the bride & groom, and birthday girl/boy, get the red packets. However, on Chinese New Year, everyone who isn’t married gets one or more from parents, senior relatives and friends. The gift of an ang pow symbolises the wishing of good luck and prosperity for the recipient.

As long as one isn’t married, one may expect to receive ang pows regardless of age. Mind you, some Chinese community like the Sin-Nins (or T'oi Sarn) would still give ang pows to recently married couples but just for their 1st year of marriage. I suspect it may be a form of easing them into the frightening and 'expensive' world of ang pow givers ;-)

The valid period for giving and receiving ang pows is, fortunately for the delighted kids [and terrifying for the givers], a lengthy 15 days, starting from the New Moon to the Full Moon of the new lunar calendar. Newly married couples would find themselves propelled, either willingly or otherwise, into playing financial Santa Claus’s.

The ang pow giving period would set them financially back somewhat, well, at least until they have children of their own to ‘retaliate’ and recoup some expenses back. Then when those children grow up and also wise-up not to let mum ‘keep the money for them’ anymore, those pitiful couple would again lose their recouping powers.

Usually the women would be the ones giving out the ang pows while their husbands look as if they don’t have any clue what’s going on, or more probably, how much cash to put in the red packets.

Deciding how much to place in an ang pow is an arcane art that only a woman with kids of her own can work out. Whether someone's kids deserve x, y or z dollars are either pre-planned or worked out ad hoc by the computerised calculator inside her head. She would factor in considerations such as how much she likes the kids (eg. like lovable KTemoc), how much the kid's parents had given to her own children, the importance or family hierarchical position of the the kid's parents, 'face', and various secrets that most men prefer not to know.

There’s favouritism involved too because as a kid I discovered I received less than my sister from the same auntie – yeah, that meanie, I never did like her anyway. As those ladies dole out the gifts, they would wish the recipients 'good luck', or 'study well and get good grades", or just 'be prosperous'.

As a kid, I naturally love ang pows, but when I passed the age of 20-ish I was terribly reluctant to accept any, and in fact attempted to avoid situations where I would most likely receive them, not because I wasn’t needy of the extra cash ;-) but I truly dread the wishes that accompanied the ang pows.

For poor KTemoc, all my aunties and Mum’s close friends would push ang pows into my reluctant hands or shirt pocket, look at me mischievously and wish for me to marry a good wife. T’was a bloody hint as well. They would follow that up smoothly with some recommendations of so-and-so’s daughters, who were all damn beautiful, excellent cooks, quiet and demure (didn't they realise I wanted hot wild babes?), all with a BA - aiyah from Cambridge University lah - or MSc from University of NSW etc, with cars of their own, blah blah blah – meat market advertising stuff.

I would usually keep very still and silent so as not to encourage them but wear a weak smile in order not to appear rude, while Mum would look on hopefully and egg on those busybody aunties who just couldn’t stand the thought of KTemoc being a carefree bachelor.

While I would sit very still in the hope I won’t attract any more attention, and that maybe they would go away and play their mahjong, they would start to dissect and discuss me as if I wasn’t around. They would trash open my characteristics and qualities into minute details, analyse my needs (for and of a suitable wife) into micron-ic specifications, etc, but with mum providing all my bad points (me? bad points? sheesh, mum!).

Terrifying! And once I even received an ang pow with a name plus a phone number written on a red piece of paper - oh, those devious aunties!

Clara Chooi said “It is considered rude to open an ang pow publicly to check or reveal its contents, because the recipient would appear greedy for money, and secondly, it may embarrass the giver if the sum is small.”

My dear Clara, there’s no necessity to open the packets. Kids will do what I and several million other kids did – we would just feel the packets and silently categorise the giver as either a cheap skate or an AOK type of lady!

But Clara is incorrect to say that an odd figure in the red packet is to be avoided as it is taboo. That might have been the case in earlier years, but the trend for the last twenty years has been to give an odd figure like, say 10 ringgit plus 10 cents - make that RM100 if you like, but you better hope you don’t have 50 nephews and nieces - or, another typical combination, RM 11.

The extra 10 cents or extra 1 ringgit on top of the round figure of, say RM 10, in the ang pows symbolises ch’oot t’au, a Hokkien term meaning to ‘exceed'. The implied wish is for the recipient to have assets, achievements, luck, fortune, cash, whatever, that exceed his or her needs. In other words, it's like wishing someone "Here's wishing you will have everything you want and more."

My favourite auntie frowned half-heartedly before she broke into a wicked mischievous smile when I teased her whether her ‘exceed’ wish for me applied to how many girlfriends I could have (at the same time?).