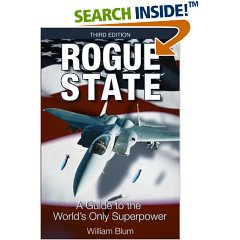 An obscure historian William Blum wrote a book titled 'Rogue State: A Guide to the World's Only Superpower'. The book severely criticised US foreign policy, and predicted that Bush so-called war on terrorism is doomed to failure. It was ranked below 200,000th on the Amazon.com list.

Then a bloke came along and recommended to Americans to read the book. When those Americans and other Westerners found out who the recommender was, they rushed to get the book, pushing it up from below 200,000th to 21st on the Amazon list in just 3 days.

The person providing the favourable book critic was none other than Osama bin Laden, yes, the Kahuna himself! This was he said on a Thursday that led to William Blum’s book being purchased like hot cakes on Sunday:

If you (Americans) are sincere in your desire for peace and security, we have answered you. And if Bush decides to carry on with his lies and oppression, then it would be useful for you to read the book ‘Rogue State’, which states in its introduction: “If I were president, I would stop the attacks on the United States: First I would give an apology to all the widows and orphans and those who were tortured. Then I would announce that American interference in the nations of the world has ended once and for all."

William Blum said that he was surprised and shocked but amused by the al-Qaeda leader's recommendation, but he admitted he won’t pretend to be repulsed or displeased by an Osama endorsement. He said: "I was not turned off by the endorsement. I'm not repulsed and I am not going to pretend I am."

And when KTemoc publishes his first book, he sure knows who to enlist to endorse his book!

book image from Amazon.com
Posted by KTemoc at 9:10 am