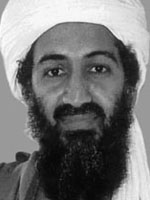 Clive Williams, an Australian expert on terrorism believes that Osama bin Laden is either seriously ill or dead.

He based his belief on documents he received from an Indian colleague. Additionally he noticed that al Qaeda’s No 2 man, Ayman al-Zawahiri, had been making all al Qaeda pronouncements for the past year.

He suggested that Osama died of massive organ failure in April last year. I am inclined to believe him because I read that the al Qaeda leader suffered from kidney problems and required kidney dialysis treatment regularly.

Apparently he received treatment in Pakistan at a military hospital in Rawalpindi. He was reported to be there on the day before 9/11.

American TV channel CBS was informed by a hospital nurse that the hospital's urology department was cleared of its usual staff and replaced with another group of medical workers because they were told that a very special person required treatment. Another hospital employee told CBS he saw Osama being helped out of a car at the hospital. He overheard two Pakistani army officers talking to each other, saying that Osama was to be carefully looked after.

Needless to say, the Pakistani government and hospital authorities have denied the CBS report.

Williams admitted that it would be very difficult to prove that Osama was really dead. But President Musharraf of Pakistan told CNN sometime ago that Osama bin Laden had probably died of a kidney ailment. Musharraf has been aware that Osama suffered from kidney problems and had donated two dialysis machines to Afghanistan, where one was for his own personal use.

But Musharraf's claim could mean anything - either a statement of expediency to get the USA off his back or ........

However Clive Williams said even if Osama bin Laden was dead, the al Qaeda terrorist campaign would continue.
Posted by KTemoc at 5:09 pm