I had previously blogged on US backyard is Sea of Pink. Now it has gotten even more so with Chile obtaining a new centre-left (socialist) President, and a woman too. 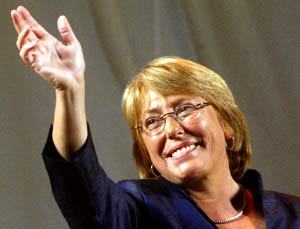 Michelle Bachelet, whose father and boyfriend were tortured to death under the draconian rule of Chile's former rightist president, General Augusto Pinochet, became the first female woman president in South America elected on her own rights - unlike Isabel Martínez de Perón who ascended to the Argentinian presidency on her husband’s name. A doctor, Bachelet was also tortured by the right wing government but survived and went into exile in Australia and East Germany.

“Socialist Michelle Bachelet, a separated mother and former political exile, won elections on Sunday to become the first female president in socially conservative Chile with a victory that underscores the left’s growing hold on Latin America.”

The amazing thing is that in conservative Catholic Chile, the new President is not only socialist and a separated mother but also an agnostic.