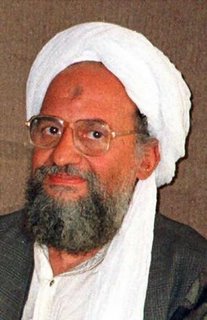 This bloke is worth US$25 million. That’s what the US has offered for his head since 9/11.

Now newpapers have announced he might have been killed by in missile strikes by CIA Predator drones in Pakistan’s northeastern Bajur tribal region bordering Afghanistan. It’s believed that 10 missiles were fired at Mamund, a village which has been known to be a hideout of al-Qaeda fighters.

It seems that al-Qaeda No 2 man, Ayman al-Zawahiri, was staying there for the last 12 months. In the air attack, 18 people, including 5 women and 5 children, were killed.

Pakistani military sources said that five of those killed were top al-Qaeda figures, presumably including Ayman al-Zawahiri. The bodies had been quickly taken away to undergo forensic tests for identification. But the Pakistani officials refused to say by whom? Major General Shaukat Sultan, the spokesman for President Pervez Musharraf, said Pakistan is investigating.

However, in Washington everyone, the Pentagon, State Department, National Security Council and intelligence officials, all said they had no information on the reports concerning Al Zawahri.

I am a bit sceptical about the claimed killing of Ayman al-Zawahiri, but only because that claim and information on the related activities (bodies removed for forensic test, etc) came from Pakistani sources. Pakistani officials have not been very truthful in their actions or information regarding the Taliban or al Qaeda, saying things the US wants to hear, but which might not be true. Read my posting on Pakistan short changing US to understand the superficial US-Pakistan alliance of convenience.

For further reading on this relationship, have a look at my previous postings:
(1) The True Obsession of Pakistan!
(2) Pakistan & Osama Playing Footsie?
(3) Pakistan - America's Afghan Problem
(4) Pakistan - Each Foot on a Different Boat!

What about the village then?

An AP reporter visiting the village 12 hours after the strike saw devastation. Villagers had already buried at least 15 people and were digging for more bodies in the rubble. American TV channel NBC said the toll in the village could reach 30 people.

Pakistani intelligence told reporters (watch this one – may be one of those Paki lies!) that hours before the strike, Shah (or Gul, as another newspaper has him) Zaman, a local tribesman accused of being a member of an outlawed Islamic extremist group, had received some unidentified guests. His house was destroyed in the attack.

But Zaman, who lost two sons and a daughter in the devastating air attack, said when he heard planes at around 2:40 am he ran out and saw planes dropping bombs, which hit his home. He denied any links with militants and said: “I don’t know who carried out this attack and why. We were needlessly attacked. We are law-abiding people. I think we were targeted wrongly.”

Strangely for someone accused of being a member of an outlawed Islamic extremist group, Zaman has been still free to walk around and talk to an AP reporter long after the attack. And the fact that he didn't go about accusing the US military of attacking his village could be a strong indication that he isn't a militant or didn't know what's going on, and was probably set up or one of those unfortunate US 'collateral damage'.

Sahibzada Haroon ur Rashid, a local lawmaker, also supported Zaman’s claim that the airstrike was conducted by US planes. But the US military denied any such operation.

The people of Damadola, some distance away, also heard aircraft flying overhead before the sound of massive explosions at the Pashtun tribal village. Sami Ullah, a 17-year-old student from the attacked village said: “My entire family (24 people) was killed, and I don’t know whom should I blame for it. I only seek justice from God.”

The witnesses’ claims of aeroplanes do point to the US military though it has denied conducting any attacks in the area. Could the denial be because the bombing target was in a foreign country, supposedly an ally?

On the other hand, Predator drones are CIA assets (also used to killed a terrorist ‘suspect’ in a car in Yemen); the Intelligence organization might have acted without US military knowledge. A CIA spokesman in Washington declined to comment on the reports, which in itself may mean anything or nothing!

President Bush and his cohorts do desperately want to pull something dramatic out of its current Iraqi fire, and the airstrike could well be a wishful hope for that. The kill of al Qaeda's No 2 man could lead to an improved standing for Bush in American eyes.

It would also be interesting to find out whether the US had been led by its nose (again) by Pakistan into launching that airstrike, in another case of short changing its US ally again? If that has been the case, the pressure from Washington must be tremendous for Pakistan to sacrifice a village.