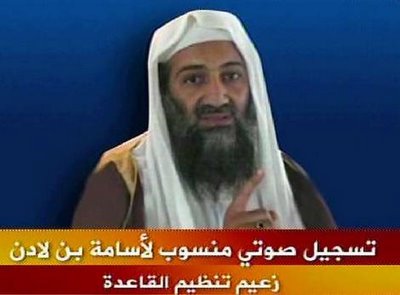 photo from Sydney Morning Herald
In a move that copied the classic strategy of Vietnam in ‘attacking’ the American ’centre of gravity’, namely her people, Osama bin Laden has delivered his latest message directly to ordinary Americans.

Osama did what the Vietnamese had done successfully – ‘persuading’ the American people that al Qaeda understands the US wars in Iraq and Afghanistan have not been supported by them, and would only benefit the industrial-military complex that President Eisenhower warned Americans against.

In a video-ed message broadcast on al Jazeera, he did the ‘stick & carrot’ thing, and said al Qaeda is ready to launch an attack on American soil soon, but would rather prefer a ‘truce’ with the American people.

The Americans lost the war in Vietnam because her public didn’t want the conflict to continue after 55,000 Americans had perished in a decade long war, that saw no direct benefit for American interests. A nation requires 5 important factors to be able to wage war, with the will of its people being one of them. Apart from fighting the Americans and her allies in a real war in their country, the Vietnamese strategists also targeted American opinion, very successfully, to persuade them not to support a hopeless war.

Osama must have sensed that the American public is growing weary of a losing war in Iraq, where American lives had been lost needlessly in a mission that was based on a pack of lies – no WMD, no al Qaeda link. The last desperate argument of the Bush Administration of regime change only saw Saddam Hussein being removed for other equally ruthless dictators.

The CIA has confirmed that it is Osama’s voice in the broadcast, which means he is still alive. However, the White House has rejected his offer of truce. Well, I certainly don’t expect the Bush Administration to openly accept the offer, but you can bet your bottom dollar that there will be secret talks starting from now.

I believe Osama has cleverly played the Vietnam-style strategy at the correct time to further weaken an already faltering support of the American people for Bush.
Posted by KTemoc at 5:28 pm