Pakistanis Protest US Killing of Villagers 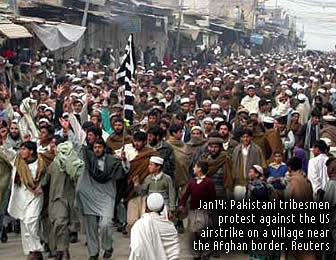 photo by Reuter via The Australian
The US air strike on a Pakistani village bordering the Afghanistan has predictably aroused outrage among Pakistanis, who saw the raid as either an affront to Pakistan’s national sovereignty or a Christian attack against a Muslim country.

The anger amongst the Pakistanis was all the more furious because the attack had resulted in the deaths of 18 or more civilians, including 8 women and 6 children aged under 10. Islamic groups numbering tens of thousands have mounted protests in Karachi, Pakistan's biggest city. Needless to say, their war cries had been 'Death to America' and suchlike anti-US slogans.

As I mentioned in previous postings, I wouldn’t put it beyond the Pakistani Intelligence to provide dodgy information to its US ‘ally’, to sacrifice a village or two just to get the incessant US pressure off its back. Washington has been under enormous pressure to provide President Bush with some credible good news in his war against terrorism. That pressure has in turn been 'transferred' to the Pakistan government.

The situation in Pakistan is very complex with regards to the Taliban and its al Qaeda ally. To put it in rather simplistic outline, there are at least 3 groups of Pakistanis – (1) Islamist groups totally sympathetic with the Taliban/al Qaeda militants [and who hate America], (2) Pakistan military Intelligence who sees the Taliban as strategic allies in Pakistan’s war against India over Kashmir and therefore has been reluctant to sell its Pashtun brethren out to the US [but not necessarily anti-US in its own political outlook], and (3) President Musharraf who is overtly an ally of the US in the anti-terrorist war [don’t know what Musharraf is his privately thinking]

Anyway, Pakistan has formally lodged a protest to the US about the strike yesterday, calling the attack as highly condemnable. It made the appropriate noise for the benefit of its people by avowing that the Musharraf government will ensure such attacks won't be allowed to happen again. Poor Musharraf is caught between the (American) Devil and the deep blue green (Islamist) sea. Its Foreign Ministry ostentatiously flexed its sovereign muscles [for domestic consumption], stating it had summoned the US ambassador yesterday to hand over a formal protest about the incident.

Meanwhile, Senator John McCain, one of the more, or even most, credible Republican Party politician - I’ve a lot of respect for this decent bloke as I have for Colin Powell - has defended the raid, saying that while he sympathized with and understand Pakistani feelings for the death of innocent people in the raid, the strike was necessary in America’s determination to rid off terrorist groups like al Qaeda. He defiantly asserted that he cannot promise America won’t conduct such attacks again as the war against al Qaeda will continue unabated.

I read his motive behind his strong hawkish stand on the air strike as political posturing as a strong contender for the Republican Party’s presidential nomination for 2008. Even Democrat Senator Hilary Clinton has been assuming a tough warlike stand. Both have seen the previously strong support for President Bush’s reckless invasion of Iraq as indicative of an American public worried about terrorism and their need for a more hawkish President in this regard. Undoubtedly they see political wisdom [commonsense] in moving with the public tide.