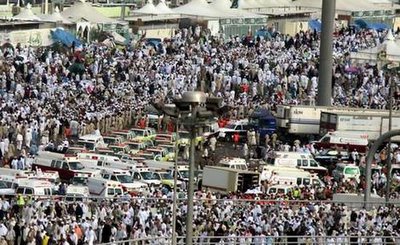 Saudi ambulances at scene of deadly crush - source: Sydney Morning Herald
It has happened again, with the stoning of the Syaitan ritual.

345 pilgrims have been crushed to death when thousands rushed to perform the jamarat ritual, the symbolic stoning of the devil during the hajj.

Many pilgrims carry their personal effects with them as they move between the various stages of the hajj. When they tripped over some luggage, they created a pileup followed by the deadly crush. The horrible result has been the terrible deaths of 345 pilgrims.

Last year the same tragedy occurred where 3 died and 500 were injured.

In a previous posting I pondered over the annual deaths at the pilgrimage associated with the jamarat ritual and wondered whether stoning Syaitan was a dangerous provocation against the Evil One? On the surface of it, the ritual seems to be.

The Saudi Red Crescent announced that another 1,000 pilgrims had been injured. The deaths were so numerous that lines of bodies covered with sheets were laid out on stretchers on the pavement. I hope no Malaysians have been involved.

Witnesses said at the terrible moment the scene were filled with horrible blood-chilling screaming. The pilgrims were jumping all over each other, and the bodies kept piling up. Apparently, apart from last year’s death, 244 peope were also killed in in 2004 and a humongous 1426 likewise in 1990.

This latest tragedy has followed closely the recent Mecca hostel colapse where 4 Malaysians were killed with 5 others injured.

Today is coincidentally Friday 13th!
Posted by KTemoc at 5:03 am