Poor Liew Chin Tong (DAP). I like him and believe he's one of the best political strategists in Malaysian politics.

Insiders informed me that without Liew's strategic advice to his party to be inclusive, the DAP would have continued on its stern prudish tight-assed previous self (which it was for almost 40 years) as it scrutinised each and every Malay membership application with a microscope and a Geiger Counter, just to make sure (101% guarantee) that no UMNO sleeper slipped into the Rocket Party, wakakaka.

Liew was said to be the one who advised the DAP to open its party doors wider to Malays especially the younger ones. That was why the party saw ex-UMNO MPs like Datuk Ariff Sabri Abdul Aziz (Sakmongol AK47) joining DAP and becoming the party's MP for Raub in 2013. There were also others.

But alas, in that encouraging inclusive process, the DAP marginalised many older kaki like my Penang lang, Zulkifli Mohd Noor, a DAP veteran of 26 years and a former elected party deputy secretary-general and national vice-chairman.

Poor Zul was marginalised for what I have read to be 3 main reasons:

(1) his difficulties with the autocratic Lim father & son party leadership,

(2) DAP giving way to PKR in Penang constituencies at the expense of its own Malay-Mamak members, and

(3) the disposal of old timers like him who were seen to be 'useless' by the new DAP Young Turks generation (and Lim's inner coterie) and thus to be pruned off as dead wood.


Anyway, back to Liew Chin Tong - Just prior to GE14, Liew had mocked MCA Youth chief Chong Sin Woon being appointed as deputy education minister through through the latter's Senate position.

Liew had naughtily jibed at Chong's ministerial appointment by asking sarcastically of the latter's ministerial eligibility, "Is there a constituency called ‘backdoor’".

Mind you, Chong Sin Woon has a praiseworthy upbringing despite his MCA belonging. His parents were rubber tappers in Negeri Sembilan. As the youngest among seven siblings, Chong as a kid (like sweet innocent kaytee, wakakaka) delivered newspapers to supplement his family's income. He attended SJKC Kuo Min and then eight years in SM Dato Mohd Said in Nilai, NS. He graduated with a bachelor's degree in Economics from UKM in 1999.

Undeniably, a typical Chinese 'lotus' who burst forth from his murky poverty and impoverished family background to become a 'someone'. Well done on his personal striving and efforts. See my early 2011 post Scholarships.

Well, today Liew Chin Tong, who lost his GE14 election bid in Ayer Hitam to MCA's Wee Ka Siong and now appointed a Senator to become a deputy minister, could well be asked the same question he posed to Chong Sin Woon, "Is there a constituency called ‘backdoor’".

Wakakaka, just what the Malays call it, "Meludah ke langit". 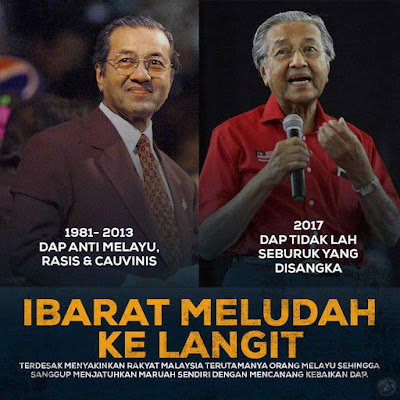 Mind, I still admire Liew Chin Tong for his intellectualism and political strategic prowess as well as Chong Sin Woon for his personal efforts to succeed as a Chinese 'lotus'. Well done to both.

But, no matter how clever we may be, we need to be always humble, courteous and civil or we will be deemed as un-Chinese and a disgrace to our parents, ancestors and civilisation - see my post un-Chinese Tony Pua.

Nonetheless, I wish Liew Chin Tong more success in his new career as a deputy minister (defence as I heard).