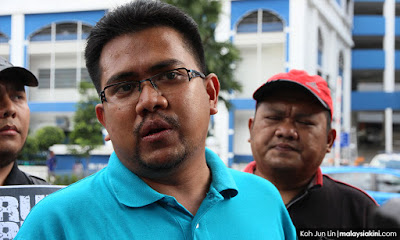 “I am worried that answers like this would open the space for more 'U-turns' with regard to the manifesto.“Furthermore, it is worrying because the 'U-turn symptom' is already happening,” he added in a statement, citing the coalition's stand on the National Civics Bureau (BTN).

Since BTN has not been abolished, he asked if there was a possibility that the Universities and University Colleges Act (UUCA) would suffer a similar fate as well.

The Harapan Youth leader was responding to Mahathir describing the manifesto as more of a “guide than a bible”.

"Sometimes we can do things, but sometimes we find that we cannot, so we have to be practical-minded," he told a press conference yesterday.

Mahathir mentioned this when commenting on the appointment of former judge Mohamad Ariff Md Yusof's as the Dewan Rakyat speaker.

The Harapan manifesto stipulated that the speaker should be appointed from among MPs.

Shukri said Mahathir's response gave the impression that the manifesto for the 14th general election was not crafted on solid grounds.

“We all know that the manifesto is the compilation of people's voices stemming from decades of the opposition coalition's struggle.

“I believe that while the manifesto is not a holy book, it is, however, a document which must be honoured since the promises allowed Harapan to achieve victory (in the election).

“Therefore, Harapan leaders must be committed to realising the (promises) in the manifesto,” he added.

Shukri said if there was a need to amend a particular promise, this must be done by giving prominence to the people by collecting feedback or holding a referendum before doing so.

“The Harapan government must initiate this new precedent to create a new era of governance.

“This is important in order for the people to understand that the current government does not change its stand on promises at its whim and fancy.

“There must be an end to the BN attitude of belittling promises and turning their back on the people,” he added.

Following Mahathir's remarks, former premier Najib Abdul Razak also urged Harapan to deliver the promises in its manifesto and not to shortchange the people.