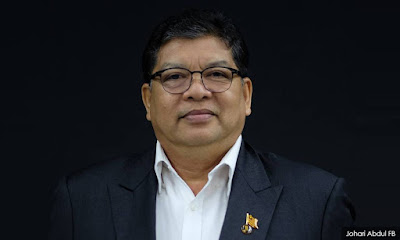 The group of ex-civil servants said the choice was “worrying” given Johari’s previous roles as director of the National Civics Bureau (BTN) and PKR parliamentary whip.

"Johari is a former BTN director, a government agency which has been heavily criticised in the past.

"More worryingly, Johari was the former PKR whip in Parliament – a role of such express partisanship certainly does not sit well with the post of Dewan Rakyat speaker which must be neutral above all else," it said in a statement.

Everything has gone to the dogs under Mahathir's so-called New-Malaysia government. Think of it, a ex director of the vile racist BTN is now the Speaker of the House. Reforms my fCking foot.

And Wan Azizah in nominating him must not be allowed off from the vile association.

BTN may be removed but it has moved into Dewan Rakyat.
Posted by KTemoc at 11:40 pm