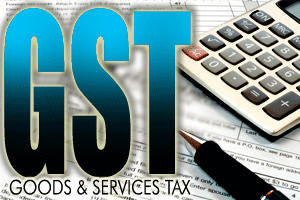 Prime Minister Najib Tun Razak should seriously consider abolishing the GST. The GST is not really bad and Malaysia is actually amongst one of the lowest in the world. No doubt this may cause a loss of RM40 billion or thereabouts a year in revenue but then this is not about economics but about politics.

Hence it is crucial that the government abolish the GST and make the voters happy. Then Pakatan cannot win votes by promising zero GST if they come to power since Malaysia already has zero GST now.


I am and have always been a DAP supporter, though I must admit that lately I have been a bit fed-up with, ironically, my once idol, Lim Kit Siang, for consorting shamelessly with his once most bitter arch-foe (or archfiend, wakakaka).

As the sons and daughter of my other hero, the late Karpal Singh said (words to the effect), it would be a disaster working with a man like Mahathir - we should draw a clear line in the sand of decency and probity. 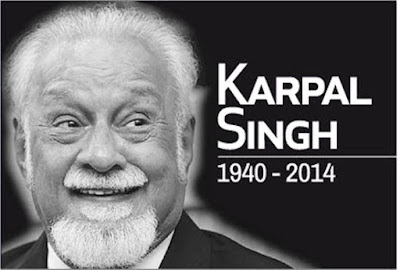 Anyway that's for another story.

But Pakatan, mainly PKR and DAP, in calling for a 0% GST is, in my humble but fair assessment, merely a political stunt and not sound economics, and if I may further say so, quite* irresponsible.

* BTW, the English word 'quite' means 'completely, wholly, or entirely', wakakaka. You didn't know that, did you?


I am not a blind-as-a-bat political this-rista or that-rista, as some in PKR, PAS and UMNO are inclined to be (what a coincidence, proving the buah bangsat langsat do not fall far from the langsat tree, wakakaka), ...

... thus even as a long time DAP supporter I have 2 issues which I totally disagree with the leaders of the DAP, these being GST and nuclear energy where I am pro both issues while my preferred party has spoken out against them.

As citizens I believe there are certain national issues which must be multi-partisan (we can't be bi-partisan since we don't have just two parties) such as defence of our nation, relieving national disasters (eg. MH370, floods, earthquakes, etc) and protecting national interests (including sports).

Much as I believe GST as a fair taxation device to be a multi-partisan issue as it benefits the nation, I accept that there are those who disagree with it, though I only respect those who might not understand the good of the taxation concept, but regret those who are politicising it for their own political points despite knowing its benefits and fairness.

Let's examine the current topic GST and leave nuclear energy for another post. I will draw in part on what I had written previously to argue in favour of GST, independent of politics.

Though scheduled for mid 2011, as a result of concerns and complaints, the Malaysian GST only came into effect on 01 April 2015 (no, it wasn't an April Fool's joke, wakakaka). Its aim was also to prepare for the day when we can no longer draw on taxes from our diminishing oil resources.

It was reported that one of the directors of the National Consumer Complaints Centre Muhammad Sha’ani Abdullah said, “The government should create more awareness on what the GST is. The public cannot be blamed for their lack of understanding, and thus, their fears”.

I agree with him as the general Malaysian public incorrectly believes GST is a new tax at 6% in addition to previous taxes such as the Sales & Services taxes at 5 to 15%.

Needless to say, Mahathir came out with guns blazing, merely shooting at anything issued by Najib, plus probably wishing (I speculate here based on Rehman Rashid's article in his book Peninsula, wakakaka, that the Old Man was mightily jealous of AAB's landslide election victory in 2004, probably wishing it was his, wakakaka again) he had been the one to introduce the GST. 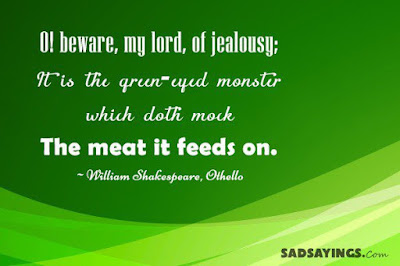 I suppose it's his rights to be jealous but he invited some adverse responses from international economists.

KUALA LUMPUR, Jan 28 — Economists have warned against Tun Dr Mahathir Mohamad’s plan to abolish the Goods and Services Tax in the event Pakatan Harapan wins federal power, saying such a move would paint Malaysia as regressing on needed fiscal reforms.

Firdaos Rosli, a fellow of Economics at the Institute of Strategic International Studies (ISIS) Malaysia, went as far as saying it was “preposterous” to entertain the idea of abolishing the GST when the Budget deficit was again widening.

“I don’t think anyone in their right mind would want to do that. Maybe we should ask him (Dr Mahathir) what is he going to do with the economy when you are short by RM40 billion in revenue?” Firdaus told Malay Mail Online.

The consumption tax was among the measures that ratings firms had pressed Malaysia to adopt in order to diversify its revenue stream that had once been heavily dependent on petroleum income. [...]

“Having a robust indirect tax system such as the GST also means that the economy is not going to suffer badly when there is a shortfall in direct tax such as corporate tax and income tax during an economic crisis. Kind of like a buffer,” Firdaos said.

Asian Development Bank’s (ADB) Dr Jayant Menon held similar views against repealing the consumption tax, saying it would be detrimental to the government’s efforts to control its fiscal deficit.

And Mahathir had been the very person who said he would do away with BR1M. What a putar-belit-rista, wakakaka.

And some goods are NOT subjected to GST, like most fresh food including the naughty and unfair extreme example provided in May 2015 by Afif Bahardin, Penang Exco on health and agriculture.

Afif naughtily showed the contrast between a fresh or uncooked lobster against the processed or manufactured instant noodles and biscuits, arguing GST would be to the benefit of the rich.

Why didn't he show the contrast between fresh or uncooked choy sum against the processed or manufactured cheese, wines and caviar?

After all, lobsters belong more to the same domain as cheese, wines and caviar. So what's the difference?

Is it raw and uncooked (no GST) or is it manufactured, processed and/or cooked (GST-ed)?

And if he had had his lobster in one of the Batu Kawan seafood restaurant in Tambun that I went to recently, wakakaka, he would have to pay GST as well, lobster or no lobster. 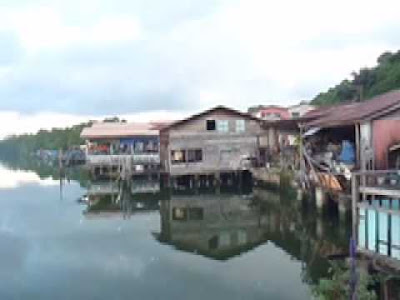 But he was/is a politician so he should be excused for his unfair examples, though we should be more careful about listening to such types of exploitative arguments.

Now, a quick question - if GST at 6% has replaced the previous Sales-and-Service tax of 5 to 15%, and if Pakatan comes to power following GE-14, what will Nurul Izzah's GST at 0% mean for Malaysia?

Let me answer my rhetorical answer - there will be ZERO tax for all goods and services as GST will be at zero while the S&S had been replaced by GST, which will effectively make the entire Malaysia far more tax-free than Langkawi, Brunei and some of the Gulf oil-countries.

Hope she can find RM43 Billion from her own pocket to subsidise the Malaysian national budget.

Alternatively and more likely, immediately after GE-14 if her party were to win to form government, her government will raise the GST back to at least 6%, if not more.

Now coming to Chinese Malaysians (bitches and dogs to Mahathir) - One of the hypocritical or bizarre moronic outcome of our toxic politics is that of some Chinese taking an anti-GST stand, when the GST actually mitigates (solves) one of their age-long complaints, namely, that they (the Chinese) alone have been bearing most of the taxes in Malaysia.

Bodoh punya Cina! Wakakaka, but alas, such is the venomous toxicity in our politics, thanks to very effective Pakatan-Pribumi campaigning against Najib that the latter must be the most evil man on earth, doing nothing else but bad things, although Mahathir had done far far worse than any politician in Malaysia for 30 years, destroying our nation's most hallowed institutions and fiddling away our once formidable wealth, and sadly, is getting away with them and even seen as a re-born saviour.

GST is already a tax in more than 160 countries including Australia, New Zealand, Singapore, UK (Britain), etc, because it simplifies taxation on goods to only one single tax instead of multiple layers of taxes.

If correctly monitored, maintained and enforced it is the fairest form of taxation - anyone uses it, he or she pays taxes for it. No consumer should be able to slip through. 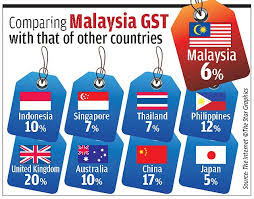 And it does NOT tax on raw or unprocessed foodstuff so the poorer rakyat actually escape from most of it, like the rich men's stuff which are GST-ed such as wines, cheeses, tobacco, restaurant cooked lobsters, crabs and abalones (wakakaka) and those evening buka-puasa jamuan at hotels.

The Malaysian GST is NOT applied to the following:

So stop the bullshit about the poor suffering from it. In fact some previously taxed goods at 15% S&S tax would have now become cheaper. 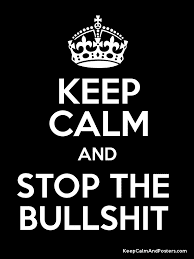 Don't conflate removal of government subsidy for oil as GST. Subsidy is subsidy and not tax. They are different. Government subsidies are like Daddy's provided pocket money, which when removed, will naturally see some losses to the pocket due to a rise in prices of subsidised goods (which foreigners North and South had unfairly benefited at our expense).

And don't mistake personal taxation and zakat (for Muslims) with GST. GST is a tax on consumption, not on personal earnings or required by religion (Christians also have a Christian zakat which is far far worse).

Mind, some portion of the GST collected (calculated fairly on which state provides how much GST) should be returned to state governments as state revenue, and not kept just by the federal government.

That's what is being done in OZ though richer states like New South Wales (NSW) and Victoria (Vic) have complained that their share of GST have gone to states like Western Australia (WA).

I personally and professionally support GST where every consumer pays. As for government subsidies, which is an entirely different issue, we need a separate post to avoid mistaking one for another.

Many in Malaysia might have misunderstood GST as an additional tax on top of the various taxes on goods employed previously. To reiterate, it is NOT. It replaces the generally far more expensive Sales-and-Service tax.

So don't listen to Mahathir. He talks cock on GST as he had previously talked cock on BR1M which he now embraces so tightly you would think he personally conceptualised and implemented it.


If his son gets into government as the PM of his Pribumi controlled Pakatan, dear Mukhriz will retain the GST on the advice of daddy Emperor Imperial and who knows, may even raise it above 6%, perhaps as additional revenue for more Forex entertainment or to build another Arabian-night type Putrajaya No 2? 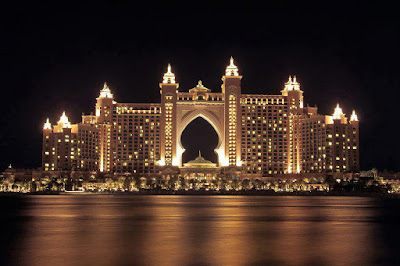 I won't be surprised if a new government under Mahathir may even re-categorise BR1M as exclusively for his pribumis and placed it under the NEP program which means the nons won't get it. He is that type of person.

As the experts (economists) say, Malaysia cannot do without the GST. The 'failed state' that you warned about will materialise if Mahathir removes the GST.

But he won't; he only talks cock now, but will shaft you gullible hopefuls later if he gets back into power.