Aneh Commander (retd) S Thayaparan has written in Malaysiakini a worthwhile-to-read article titled
'Zaid Ibrahim is Malay, too', a play on the title of Zaid Ibrahim's book 'I, too, am Malay', published in October 2009. 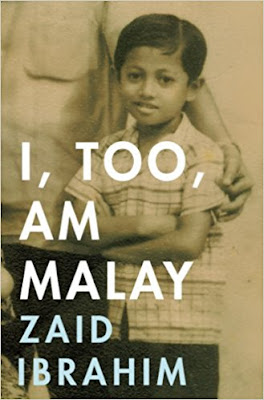 Aneh said of Zaid's book: What this book attempts to do is to make a rational argument that he, too, is part of the Malay community and that the policies that supposedly favour the Malays are in reality policies that are there to maintain hegemonic control.

This is where the book shines. Moving beyond race and religion, the book is a narrative about failed policies which supposedly exist to maintain racial and religious supremacy but in reality, constrain the Malay polity which in turn creates a toxic environment where Malaysians are at one another’s throats instead of working together for the betterment of all communities.

In other words, UMNO hegemonic-inclinedintented policies, probably issued since 1981, have backfired on the Malay community.

Didn't Mahathir once remark on the same but in a different way? 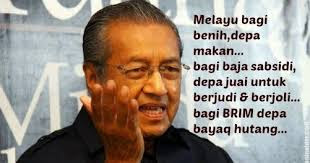 Mashal Rosenberg, an American psychologist remarked that "... there is a problem with rewards and consequences because in the long run, they rarely work in the ways we hope. In fact, they are likely to backfire."

Mind, it has to be said those hegemonic-intended policies, though in strategic terms have harmed the Malays, must have benefited Mahathir's mateys and cronies plus those of his two (wakakaka) successors.

I suppose in the end it has been a case of 'F*** the hoi polloi', wakakaka.

Anyway, in September 2008, Zaid resigned from UMNO as de facto Law Minister to protest against the detention of DAP's Teresa Kok, Sin Chew Daily's Tan Hoon Cheng, and would you believe, wakakaka, Raja Petra Kamarudin, yes, the one and only RPK of Malaysia-Today (either Malaysia's most famous or most notorious blogger, depending on your political affiliation or personal perception).

Such has been the personal standard and integrity of Zaid Ibrahim.

After a while, Zaid joined PKR instead of DAP, much to my personal disappointment. But Zaid had then remarked that he could have done either (that was, joined PKR or DAP), as he saw no difference in those choices, with words to the effect that it was 6 of one, and half a dozen of the other.

He was to later regret joining PKR when he was given the 'Azmin-routine', wakakaka.

Let me now write a few words on what I have written before.

Zaid ... was appalled by ... the PKR party polling process, that it was rigged, the polling officials lacked impartiality, and ballot papers were mishandled. He made his complaints, calling for the polls to be aborted and for the polling system to be reviewed. He wasn’t the only candidate to do so.

Despite hundreds of complaints from other PKR candidates and branches, the JPP, PKR election committee remained bizarrely silent.

When Haris Ibrahim of the People’s Parliament blog, handed over a PKR ballot paper for the party's deputy presidential contest to Dr Molly Cheah, the chair of PKR JPP, she responded that was the first she knew about. But what has she done about that?

RPK praised Dr Molly Cheah as an honest person. I’m sure everyone agrees with that, but Malaysiakini journalist Terence Netto wrote about Dr Cheah’s cluelessness and lack of know-now in her role as the principal monitor of the PKR party elections. Her personal honesty was not enough. She should have taken a more assertive participation rather than (as we understand from Haris) leave it to the party secretariat to do her job. [...]

Anwar Ibrahim claimed that PKR had answered Haris Ibrahim’s query on the ballot papers. But Haris pointed out that the explanations by the party secretariat (mind you, not the JPP) did not answer how he (Haris) came to be in possession of the PKR ballot paper, regardless whether the ballot was 'old' or not. It was frighteningly available to Haris, a non-PKR member! [...]

The PKR top leadership seemed hell-bent on bulldozing the polls through to its conclusion, as planned, regardless of complaints from candidates (Zaid and Mustaffa Kamil), party members (Jonson Chong and other branch leaders) and independent observer (Haris Ibrahim).

In the face of such stonewalling, Zaid Ibrahim, the type who suffers no fools, had probably become more riled by the nauseatingly noxious noisome jeers from the anwarista praetorian guard. [...]

This was a man who resigned his ministerial post in protest against the use of the ISA against Teresa Kok and Raja Petra Kamarudin and a sweetie reporter, not like someone who had to be chucked out of UMNO screeching, screaming and taking to the streets. Zaid does not suffer fools gladly.

When he was in PKR at the time leading to the party polls (before he tossed his hat into the election ring) Zaid was criticised for being erratic because one moment he said he would not challenge the deputy presidential post IF (initially) Nurul Izaah took up the challenge*, then IF (subsequently) Khalid Ibrahim did so, and then only when both (Nurul and Khalid) didn’t, did he take up the challenge.

* Azmin Ali went into a panicky tizzy when Nurul causally mentioned her interests, and he swiftly ‘advised’ Nurul against it because people would talk.

The standard anwaristas' cries against Zaid were of his inconsistencies (in supporting Nurul, then Khalid, before standing as a candidate himself), and their accusations blindly attacked Zaid for his lust for power.

But I didn’t see any inconsistency in Zaid’s manoeuvrings. In fact there was a very consistent objective in his support for firstly, Nurul, and subsequently for Khalid Ibrahim, before he personally challenged Azmin Ali in the party election.

His consistent objective was to prevent Azmin Ali from coasting home on an Anwar-provided free ticket into the deputy president post. He wanted Azmin Ali stopped!

Yes, Zaid was invincibly against Azmin Ali, the man for whom Anwar Ibrahim instructed Nallakaruppan to stand aside in a party VP contest some years back, and which drove Nalla out of the party in angry frustration. Nalla would have easily won that VP position because of the strength of his Indian supporters in PKR and the clear evidence of his numerous nominations for party VP which were far far more than Azmin's.

Zaid tried his best to stop Azmin from becoming party deputy president, a post which is a mere heartbeat away from party president. Thus he challenged Azmin for the post.

But Zaid was forestalled by the questionable party polling process.

And I could tell you stories about him, Anwar and Azmin in the Hulu Selangor by-election. Perhaps in another post, wakakaka.

Yes, in the end, despite being the real victim, Zaid Ibrahim was wrongly maligned, both personally and as a politician.

The Malaysiakini article by Aneh is much welcome, as has been Zaid Ibrahim's book. They give us the opportunity to review and assess what other big-name Malays won't tell you about the real strategic benefits or consequences of our national politico-ethnic-socio-economic policies.