Remember my post The 'rich' char koay teow boy in my other blog Kongsamkok?

In that post I narrated the story of a very ‘rich’ Chinese Malaysian.

He was most certainly 'rich' in bitter experience at striving to survive at the bottom end of the socio-economic ladder. A PhD post graduate from the University of Hard Knocks, his doctoral thesis was “The liminal universe of ‘what-ifs’ in the paradigmatic manifestations of adversity and its unambiguous correlation with forgone opportunities.”

My friend, Knocked-tor Tan Ah Kow PhD, was born into a ‘football-team’ family, where he and 10 siblings could make up a full soccer team, though alas, without any to sit on the reserve bench. There were 7 boys and 4 girls covering an extensive range of age which, if possible to translate into two dimensional length, would have easily spanned a distance from Kangar to Tawau - such was the fantastic fecundity of Mr and Mrs Tan, their parents.

His dad was a manager of a pre-1950 type of Chinese hotel in Penang, the kind once found in the town area bordered roughly by Chulia Street, Beach Street, Prangin Road (re-named Jalan Dr Lim Chwee Leong) and Penang Road. 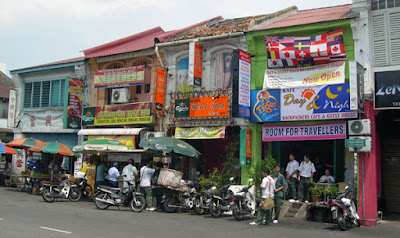 The hotel’s typical clientele would be struggling Chinese fishermen and farmers from Kedah and the rural hinterland and their families, assorted salesmen, visiting mechanics and bay-kor-eoh sinseh (Chinese medicine man).

In its more ‘luxurious’ rooms, antiquated ceiling fans rotated reluctantly, groaning out their creaks and whines as they stirred the hot humid fetid air around in the room, unless the sole window was opened, whence then it would mix the fetid air within with whatever the outside offered, sometimes the garlic-heavy aroma of koay teow t’ng, sometimes the strong oily fume of fried eu char koay and sometimes the stench of stuff best not mentioned. 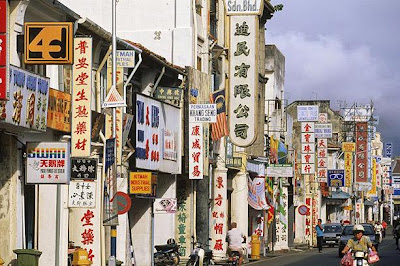 That was the Penang Chinese Heartland.

Yet, yes, yet in this Chinapek Heartland sits a masjid (mosque) called Masjid Al-Jamiul Azzakirin at the corner of Prangin Road (Jalan Dr Lim Chwee Leong) and a lane named (in my time) Rope Walk or now called Jalan Pintal Tali.

It was build in the very early 20th Century (say, around 1900) by Indian Muslims. It sits peacefully there in the very heart of Penang's Chinese Heartland for the last 110 years.

I have never heard of any disturbance by Chinese, not even during May 13.

There are also height restrictions and restriction that non-Muslim places of worship cannot be built near commercial areas.

If one were to look at Masjid Al-Jamiul Azzakirin, it's cheek by jowl with Chinese houses and shops.