Hannah is a very biblical name which in Hebrew means "favour" or "grace". The most important Hannah in the Books was the mother of Samuel.

Yes, 'twas that Samuel who f**ked up King Saul kau kau because the rotten priest was jealous he lost power and control of the Israelite people to a young popular king, who was voted into power by the rakyat.

Thus was hatched the Samuel-ish plot to nurture, anoint and scheme for David to seize the Israelite throne from an innocent Saul. David did it by murdering, f**king, assassinating, betraying Israel, and through various diabolical plots. The rest is biblical history.

Naturally David, though the MOST evil man in the Bible (murderer, adulterer, assassin, traitor to Israel, and what have you) was 'written up' by his Davidic descendants as God's beloved (while poor Saul was 'written down', wakakaka). And Samuel, his equally evil mentor, became a biblical prophet.

But we have our own Hannah in Hannah Yeoh, the speaker of the Selangor State Assembly.

Currently, she is now in a bit of a politico-religious strife, invoking Islamist attacks on her brand of Christianity. We know of Hannah's devotion to her religion but for her to be accused of Christian Dominionism is new and intriguing.

Wiki tells us that the term "Dominion Theology" is a reference to the King James Bible's rendering of Genesis 1:28, the passage in which God grants humanity "dominion" over the Earth.


And God blessed [Adam and Eve], and God said unto them, "Be fruitful, and multiply, and replenish the earth, and subdue it: and have dominion over the fish of the sea, and over the fowl of the air, and over every living thing that moveth upon the earth."


This seems to be change from the usual Christian-Hindu attacks against ulamas, wakakaka.

But it isn't a laughing matter because Dominion Theology has a very very cruel and way beyond medieval belief, a belief that all of society, especially sinful secular ones gulp, should be governed by Christian stewardship and in accordance to the laws that governed the Israelites in the Old Testatment.

This is not dissimilar to ultra Islamists' call of syariah laws, where under Christian Dominionism, non-Christians will be excluded from voting and citizenship, while Biblical law applied by the state will see, fro example, homosexual acts, adultery, witchcraft, and blasphemy punishable by death. Also, propagation of idolatry or 'false' religions would be illegal and could also be punished by the death penalty.Oh, how I love those Middle-East religions.

The PAS research centre has urged DAP to respond to a book authored by Iain Buchanan, an academic from New Zealand titled "Sang Nila Utama and the Lion of Judah: Dominionism and Christian Zionism in Malaysia". 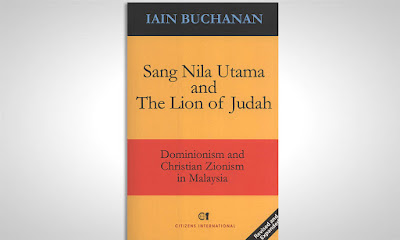 The centre's director Mohd Zuhdi Marzuki claimed that Buchanan's book, which was published in 2015, clearly mentioned the involvement of DAP leaders such as Lim Guan Eng and Hannah Yeoh.

"For example, from pages 26 to 34, under the subheading 'Dominionism: Lesson from Penang', the writer mentioned the involvement of the Penang government headed by DAP.

"Lim and Yeoh are mentioned under this subheading. The PAS research centre views this as a more important matter which DAP must respond to," he added in a statement.

Though Christian Dominionism sneers and frowns on secular societies the book indicates the religion stress on the unity of religious and secular actions to achieve its objectives.

Let's see what the DAP has to say, wakakaka.