A post in M2Day asked Why is PKR so muddled up? 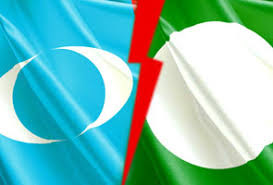 As one of the visitor to M2Day commented, rather succinctly:

A simple answer which you cannot find it. PKR is all about Anwar. Setup as a path for him to become PM and to escape conviction.

It is filled with Anwar's family members, his cronies, warlords and also blue eye boys.

So when Anwar is no longer there, their purpose shambled, they turn to each other to fight for whatever leftover.

It is like a person with 4 wives. Once he is not there, the wives will turn against each other for the husband's leftover.

And wasn't it true that Anwar's loyal wife formed the (preceding) party in 1999 to help free him from incarceration. The rest is history.

Under Anwar, PKR was doing quite well but with his ouster and his 'big picture' (that he wanted to be PM), the vipers within that party not only attacked each other but stabbed their so-called Pakatan allies in the back.

For months every adult in Malaysia knows the split would be inevitable, undeniable and total. But trust PKR politicians to live on in delusion.

I must confess that years ago I was once approached by a rich towkay to join PKR at a high echelon. When I told 'Uncle' that apart from my distrust of Anwar, I have long been a DAP supporter, he responded that the DAP was too 'Chinamen-ish' and the future for Malaysia lies not with the DAP but PKR.

Recently I paid a courtesy visit to the rich 'Uncle' and asked what would his political opinions be today. He acknowledged I was right then, and am still right now, and just shook his head dismally at PKR and Anwar.