What happened to British 'Freedom of Expression'? 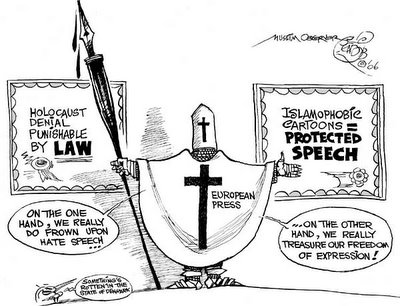 image from Uruknet.info
"There is a myth that we love freedom, others don’t: that our attachment to freedom is a product of culture; that freedom, democracy, human rights, the rule of law are American values, or Western values … Ours are not Western values, they are the universal values of the Human spirit".

Tony Blair - a speech given at a joint session of the United States Congress, summer 2003

Ken Livingstone, the mayor of London, has never been one to kowtow to convention or the British ‘establishment’. Like George Galloway, he was from the British Labour Party but left it to stand against Tony Blair’s candidate for the London mayor’s post against Blair’s candidate, and won.

Subsequently he rejoined his old party but still frequently spoken up against Blair, the Americans, the Iraqi war, British police, reporters or anyone he reckons ought to be told off. One of his bête noires is the Evening Standard, a newspaper he detests.

As would have it, last year the Evening Standards sent a reporter Oliver Finegold to question Livingstone when the latter was leaving a party.

Livingstone nearly went ballistic when Finegold identified himself as from the Evening Standard. That’s like waving a red flag in front of a bull. Livingstone just loathed, and still does, the newspaper, so he asked of Finegold: "What did you do? Were you a German war criminal?"

Finegold retorted he was Jewish, and that calling a Jew a Nazi war criminal was an offensive outrage. In turn, Livingstone riposted that Finegold was more like a concentration camp guard, because he just did what he was doing for pay.

Going on the offensive against the hated newspaper to remind the reporter who he had been working for, Livingstone added that the Standard's sister paper, the Daily Mail, had supported the Nazis in the 1930s, and reminded Finegold he, Livingstone, had been rude to reporters for decades and had no intention of changing. Besides, other reporters hadn't complained on what he had uttered so there’s no use telling him he couldn’t speak to Jews like that.

The powerful Board of Deputies of British Jews lodged a complaint against him for his remarks against a Jew, and a three-person panel which hears complaints against local authorities passed a finding to suspend Livingstone from his position as mayor for 4 weeks.

The British media were shocked by the unduly harsh verdict on what had been nothing more than verbal sparring between the mayor and a reporter from a newspaper the mayor detested. They had expected at most a public rebuke but obviously haven't reckoned on something even more scared than the European 'freedom of expression', that is, Jewish feelings.

Livingstone was unrepentant, saying the panel's verdict struck at the heart of democracy. He also scoffed at the idea of the 3 members of the complaint panel, which no one has ever elected [former Aussie PM Paul Keating called such people 'unrepresentative swill'], be permitted to overturn the votes of millions of Londoners who had elected him as mayor.

In Europe or America, when it comes to anything that offends Jews, such as the remarks by Livingstone, which was directed at a newspaper rather than the Jewish community, or young Prince Harry’s fancy dress ball swastika arm band at a private party, or David Irving’s crackpot Holocaust Denial, the Europeans woud suddenly go into apoplectic fits of guilt and forget their own nauseating preaching on ‘freedom of expression/speech’ to others including and especially Muslims, slipping irretrievably into cringing servitude to appease the Jewish lobby.

While one can understand the need to control anti-Semitic violence, one cannot on such ridiculous censorship and disproportionate punishment of 4 weeks suspension or 3-years imprisonment for saying something that the Jews deemed offensive.

The Europeans’ double standard, of utter subservience to Jewish interest while sneering down on Arab-Muslim sensitivity, calls into question their political, religious, racial and ethical hypocrisy.