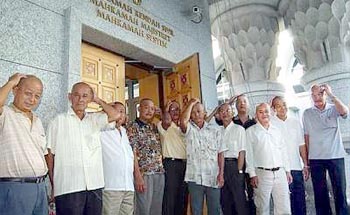 photo from Star Online
What security issue was achieved by shaving bald the heads of these granddads? Have they been convicted yet, of whatever crimes? Indeed, what notorious crimes did they commit? Are the Police judges as well that had deemed those old men guilty and meriting of punishment through the shaving of their heads?

Questions galore, but the same ones that we had asked in the Squatgate incident?

The independent (Squatgate) Commission had said that the Royal Malaysian Police lacks public transparency and accountability on its conduct, and worse, is resistant to change. That's right, 'resistant to change' as we have just witnessed. We saw further proof of that in the recalcitrancy of the Kajang OCPD who insisted that it's normal procedure to shave detainees' heads as required by the law.

Is he so stupid as to suggest that shaving the heads of those detained by his men for playing mahjong was a necessary and vital procedure? Is he even more stupid to expect us, the public, to accept that?

Since when has the law given, or what sort of law gives the police the right to judge and conduct such an unnecessary and humiliating abuse? What public benefit was achieved? Falling back on some obscure police procedures - yes, there may well be one - as an explanation of the unmitigated shaving (didn't just happen once) is not an acceptable answer. But it did indicate the way police treats the public - with contempt, disdain, arrogance, sadism, and a lesson for the public to know siapa raja (who's the boss).

The police obviously feel a compulsion to mindlessly perform such acts that are totally meaningless and irrelevant to public safety or protection of property, purely to reinforce their self-perceived 'superior' position. Therefore, unless one is fortunate to be a somebody or politically connected, thus more 'superior', one is fair game for the police to bully, exploit and put in place.

Let me qualify this assessment - not all police persons are like that, but where the 'cap fits, wear it' (kalau dah makan chili, memang merasa pedas!).

These so-called public guardians, or more aptly public goons, unfortunately have unfettered powers as a result of ministerial tolerance and an absence of regulatory oversight/audit. As an example, they could even decide by the way someone dressed whether she was a woman of ill repute. And to confirm their assssment (and demonstrate their 'superiority'), they even felt free to stroke the victim's buttocks. And if anyone complained, into the lockup she would go, followed if they wished, by a charge of disorderly conduct.

Why are we so inclined to readily believe such behaviour of the police? Experience, precedence, repetitive occurrences, coverups, etc. Well, most certainly, the police lacks 'accountability' for its actions. The OCPD's idiotic response - "we have such a procedure, we thus did it" - has been typically that of the mindless, prone-to-arrogant-abuse police.

The root of the problem is the abysmal lazy leadership. There is no bad soldier, only bad generals. The PM who is also the Internal Security Minister must make the hard call. Strike at the heart of the problem, uproot the weed, decapitate the poisonous head!

The senior officers, starting from the IGP and the deputy IGP, must go. There is no place for pathetic people who lead such a terrible police force - law officers that are held by the Malaysian public and tourists to Malaysia in utter contempt, sheer distrust, immense distaste, in some cases virulent hatred, and unfortunately, with great fear.

Unless we see some top heads rolling, we should stop pretending that the Police force could ever change. For example, the police token suspension of the person who took the Squatgate video clip has not and does not address the real issue of severe abuses, general corruption and the embarrassing lawlessness within the police force.

Yes, get rid of the IGP, deputy IGP and most of the senior officers. Does the PM have the will to act decisively?
Posted by KTemoc at 9:35 am