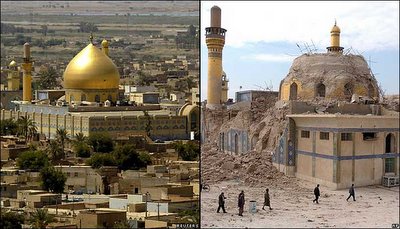 BBC photo
Above photo shows the 'before' and 'after' of the bombed al Askari Shrine, the sacred tombs of Ali al-Hadi and al-Hasan al-Askari, the 10th and 11th Shia Imams, and where the 12th Imam, Mohammed al-Mahdi, disappeared.

For hundreds of millions of Shia Muslims the shrine is of great spiritual significance. Bombing it must be for them the ultimate blasphemy.

In invading Iraq and marginalising the Sunnis because of their 'suspected' allegiance to Saddam Hussein, the USA has opened Pandora's box and let loose this and this.

Who has done the unthinkable? No one in Iraq knows, no one there cares!
Posted by KTemoc at 10:03 am