I am going to 'fess up to one of my secret fantasies. But I better start at the very beginning, when I was still at school.

One day {Penangites would say 'Nah, limpeh kar lu kong hnar ...' ;-) }, while in Keat Seng coffee shop with Michael, my classmate and best friend, I foolishly revealed to him that I had the hots for the teenage daughter of the koay teow stall man. She was standing just 5 metres away talking with another girl behind the shop cash counter. She had the sweetest demeanor.

Michael turned to me with a sneer on his face, and proclaimed - I thought rather too loudly for 5 metres - "She's just a kid, you cradle snatcher!" And there we were, two teenagers ourselves.

I cringed in embarrassment - at his booming revelation of my secret passion in such a crowded place - and protested, in a lowered voice, that she must be at least 15-ish, our age. Michael crushed me with an incredulous look. The bastard had this amazing ability to convey his disdain of my taste in girls with his versatile facial expressions, which at that moment, I did consider sinking my fists into. He tautologised: "That baby-face baby 15? Sheesh!" and added with a terrifying (for me) "I'll ask her."

Before I could react to prevent him from walking towards my dream girl and - knowing his teasing propensity to embarrass me - revealing my secret admiration to her, he had already reached the counter. Ever so confidently he slid into easy conversation with the 2 girls. After what I assessed to be a lengthy conversation, during which I noted with increasing trepidation that the girl was smiling so sweetly at him, he returned to our table looking like the cat that had licked the cream.

"And ..." I said excitedly and with full expectation he'd pass that vital info to me.

"I've a date with her tomorrow."

KNN*, the bastard potong jalan me [stole my dream girl from me].

*KNN = Karn Nee Nare - a Penang Hokkien expression that's best translated, in the presence of ladies, as 'Dash it!"

You need to understand, my best pal Michael was good looking with the most devilish handsome smile, smartly dressed, tall and slim, confident and well spoken, had a snazzy motorbike, plenty of cash in his pocket [upper middle class family - dad's a Chartered accountant], had a terrific collection of the latest pop songs, played the guitar, danced like Fred Astaire, yes indeed, a bloke with many charming talents. Teenage girls were easily attracted to his easy going Adonis ways.

Me? Well, the class called us the 'beauty & the beast' and may I just clarify that those name calling was unnecessarily spiteful by immature classmates who were jealous of our close friendship - we had always worked as a tight team.

As for my own bike, my late grandfather did leave me his rusty vintage bicycle with a tradesman-type rear goods rack - the type that could hold several 30 kg sacks of rice, which granddad delivered for a grocery shop. No one in my family wanted the daggy bike anyway, and neither did I, but I was told to use it to cycle to school. I knew that if rice was not transported, it could carry easily two girls on the rear carrier, which regretfully for me, never did ever eventuate.

What about dressing? I must say that day in Keat Seng coffee shop I had on my feet a pair of blue and brand new Japanese slippers [thongs to Aussies].

I was also damn shy which may explain why I didn't have the guts to strike up a chitty-chat with sweetie - mind you, my favourite aunt said my shyness was charming - oh, how I clung on to her verdict like the proverbial straw. And I wasn't exactly without talent, as I could fold an origami sampan rather well.

They say 'opposite attracts' which could well sum up my relationship with Michael. Despite our contrasting nature Michael and I were best buddies - I remember our times at school as halcyon days.

After we left school, I didn't see nor hear from Michael who went overseas for university. Being him, he was probably too busy enjoying himself with the ladies to write to me as he had vowed. The years passed by swiftly and sadly we completely lost contact.

From time to time I did hear from mutual friends how he was getting on. Then I heard he married a real stunner, a Miss this-or-that, which wasn't surprising for our Adonis. I also learnt that his wife turned out to be a real nasty domineering bitch, which might have been a Karmic outcome for Michael's teenage Casanova flings.

But my regular defeats by Michael in the 'faint hearts never win the fair lady' contests during our school days did, I must confess, leave me unconfident, psychologically scarred, and competitively cringing. Battered badly in the self-esteem department, I upheld Nature's tactics and evolved to survive in the game of the hearts.

I knew Michael didn't particularly like older women so I decided that it might be a sensible and sound move to shift my targeting of the fairer gender to 'types' that Michael didn't have any interest in, the more 'mature' women.

At this juncture, I thought I would remind you of my weakness also for strong minded, power-inclined, good looking but bitchy women, as you would have gathered from my stories of Rightwing Bitch and Rightwing Bitch (2). Where I was concerned, it wasn't hard for those women to be strongminded, power inclined or bitchy - most of my girlfriends called me a passive wimp. Oh, how those girls bullied poor me. Only in one area did I remain resolute and defiant - my leftwing principles!

But in the end, my developed interest for … eh … more ‘mature’ women, overlaid by an ass-whipped, sexually neurotic and troubled subconscious - blame Michael for this - and my inherent shyness, I took instead to fantasizing about such women rather than having real affairs.

Yes, I indulged in a fantasized lust list, of powerful, good looking, 'mature', bossy and 'baby-face' women - the last characteristic was not always a criterion but probably a token resistance against the awful memory of my loss to Michael of the 'baby-face' koay teow belle.

BTW, the latest with Baby - and I wouldn’t be surprised if her family calls her that, as ‘Baby’ seems to be quite a popular name for Filipino women - has been the Filipino opposition demanding her resignation, but she told them to bugger off. In fact, she has just neutralised a military coup, and declared a state of emergency in the Philippines.

Her strong and confident gesture had sent me into near orgasmic delight. My knees felt weak as I witnessed her taking on a bitchy stance. 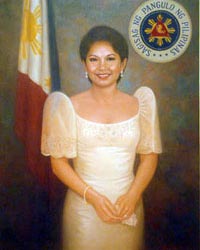 Now, now, if you are attempting to demoralise me by suggesting she’s near 60, hey, that’s discriminating against age. I am an equal opportunity lover, so cease and desist! Also, knowing a bloke like Michael wouldn't have any interest in such a 'mature' woman, I feel somewhat comforted. Besides, a Pommie friend once wisely advised me, “Many a fine tune have been played on an old fiddle”.

She’s great looking (yum), sexily baby-faced (ooooooooh!), powerful (gasp) and obviously highly intelligent (gasp again). She holds a PhD in economics. Here’s a picture of her when she was younger - gorgeous, gorgeous, gorgeous! 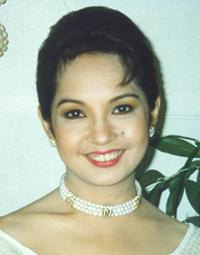 So excuse me as I fantasize of a wishful tryst with Gloria. It’s KTemoc’s contribution to ASEAN solidarity. God knows in today's ugly world, we could do with better neighbourliness.