Egyptologist-archaeologists have discovered a more-then-3000 years old tomb containing 5 mummies, and then, by accident too. They were conducting scientific excavation and the conservation of the tomb of Late 19th Dynasty King Amenmesse when they chanced upon an ancient shaft-hole.

The newly found tomb lies just outside the most famous Pharaonic tomb of Tutankhamen [to be pronounced as tut.ankh.amen, and not commonly thought as tu-tan-khamen] They were clearing some debris when they chanced upon a shaft opening that led 10 metres down to the discovery of the mummies.

At this stage no one knows their identities, but for someone to be buried in the Valley of Kings, they were definitely not your ordinary ancient Egyptian peasants. Experts are of the view that the 5 mummies plus some jars were placed in the shaft-tomb, perhaps after they were shifted away from their original tomb(s) to save them from theft or desecration.

This is the most significant tomb discovered since Tutankha 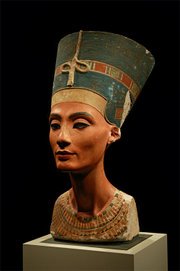 The graves or mummies of Akhenaten, Nerfetiti [on left: her famous bust in Berlin Museum], second wife Kiya, Smenkhkare, Ay were never found, though there were some false alarms, which claims were shot down by experts. One wannabe Howard Carter was banned by Dr Zawi Hawass, the Egyptian Secretary General of the Supreme Council of Antiquities, for sensationalising her unsubstantiated discovery. Apparently she had a media contract to fulfill.

But wouldn’t it be thrilling if the 5 mummies turned out to be those of Akhenaten, Nerfetiti, Kiya, Smenkhkare and Ay, or one of Akhenaten’s many daughters? These personalities were politically erased from the 'pages' of ancient Egyptian history by the last Pharaoh of the 18th Dynasty, Horemheb. Their cartouches or royal Pharaonic signs were desecrated (chipped away). It was only subsequently that archaeologists discovered their existence.

The 18th Dynasty plays a central role in my series of ‘Who is Abraham?’ postings, which I left abruptly at posting No 21 due to subject burnt-out, and promised in July last year to continue, but till today still lack the motivation to do so. Maybe this discovery may fire me up to continue on ;-)
Posted by KTemoc at 8:45 am