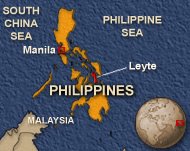 Something terrible happened. Today, in the Philippines, in its island of Leyte, mudslides have wiped out 2 villages.

Authorities are still unsure how many victims were there, but some have put the figure at around 2000. Only 4 bodies had been recovered so far with the rest still missing.

The mudslides were triggered by heavy rain. One survivor said that there was no warning as mud swept through the area in a frightening manner. All he first knew something was happening was when the earth shook and a strong gust of wind blasted by. Then he felt mud at his feet. The village children, including 2 of the survivor were swept away or buried.

Not one single structure remains standing. One observer suspects that in some parts, 90% of the villages have been buried.
Posted by KTemoc at 7:15 pm