In Kota Baru, two snatch thieves didn’t quite bargain for what they were shortly to experience when they snatched the handbag of a woman as she was just getting into her car. Thinking they were safe as they sped off after robbing, ala, just a woman, they must have been shocked when the lady bundled her son into her own car and gave chase.

Zipping through the traffic in hot pursuit while continuing to provide ABC spelling lesson to her son, she rammed her car into the getaway vehicle. Yeah, she sure was going fast! 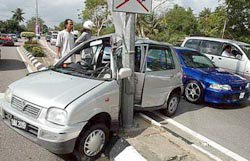 Star photo
Not only that, she lost control of her car [KTemoc is keeping his mouth shut here] which careened straight into a gymnasium equipment store, smashing up things until the roof caved in, caused a 3rd car to hit a hawker stall and built up a massive traffic jam. She then shouted to the startled owner of the wrecked store to go after the thieves, and bet you he complied instantaneously.

Lady got out of her car, pat her son on the head, went straightaway to chin-up bar [remember, it's a gym equipment store], did a couple of smart pull-ups before she joined in the chase.

One of the thieves was apprehended. The other would have been too if he wasn’t so terrified of Wonder Woman [drooool!], which must have lent wings to his heels.

But the woman got back her handbag in which was the makeup kit. She retrieved same and straightaway applied a bit of powder on her nose.

P/S - OK, I did add a bit of KTemoc’s spice in my version of the incident - see if you can guess which bits without referring to the link?
Posted by KTemoc at 7:15 pm